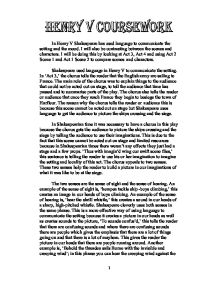 In Henry V Shakespeare has used language to communicate the setting and the mood. I will also be contrasting between the scenes and characters.

'Cripple tardy-gaited,' 'foul and ugly witch' and 'horrid ghosts,' are words that emphasise ugliness. Those words make the reader not want to go there and they tell him or her that the place is disgusting, revolting and that it is an unpleasant place to be. 'Ghosts' and 'witches' are supernatural images. These images may make the reader feel scared and make him or her feel the same as the people in the camp. There are words and phrases that tell the reader time is passing slowly. These words and phrases are, 'creeping,' 'c***s do crow, the clocks do toll,' ' third hour of drowsy morning name,' and 'piercing.' The effect that these words have on this scene is that it seems that this scene is time dragging. The reason why I say this is because the armies want the battle to be over but they also don't want the battle to come. It is a bit like exams, because everyone doesn't want the exam to come but when the exam comes they want to finish the exam and get it over and done with. Words which tells the reader about the sounds about the camp, words which emphasise ugliness, supernatural images and words they tell the reader time is passing slowly creates a weird and spooky mood in this scene. ...read more.

In Act 2 Scene 1 there is a conflict between Nym and Pistol but on the other hand in Act 1 Scene 2 there is a conflict between the king of England and the king of France. The conflict between England and France is meant to be taken seriously however, the conflict between Nym and Pistol is not meant to be taken seriously. I think that Shakespeare put this scene because everything up to the scene had been serious, so the audience had to laugh other wise it would have been boring and who better than the low life characters fighting over a hostess to laugh at. I think that Shakespeare is effective in using language to convey his ideas about characters because from looking at these two very early scenes we can tell who is royalty and who are low life characters and their personalities (whether they get jealous or release their anger). All in all I think that this play is very well written, because from it the reader can find out who the low life characters are. Another reason why it is well written is because it has a few comedy scenes, which gives the reader a break otherwise the play would linger on and would seem to be boring. BY BHAVIN PATEL 1 ...read more.