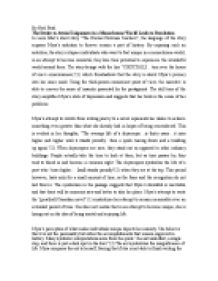 In Leon Edels short story The Eternal Footman Snickers, the language of the story exposes Myras ambition to forever remain a part of history.

﻿By Neel Patel The Desire to Attain Uniqueness in a Monochrome World Leads to Desolation In Leon Edel?s short story ?The Eternal Footman Snickers?, the language of the story exposes Myra?s ambition to forever remain a part of history. By exposing such an ambition, the story critiques individuals who want to feel unique in a monochrome world; in an attempt to become immortal, they lose their potential to experience the wonderful world around them. The story beings with the line ?COCKTAILS?turn over the layers of one?s consciousness,?(1) which foreshadows that the story is about Myra?s journey into her inner mind. Using the third-person omniscient point of view, the narrative is able to convey the sense of insanity presented by the protagonist. The dull tone of the story amplifies Myra?s state of depression and suggests that her book is the cause of her problems. Myra?s attempt to switch from writing poetry to a novel represents her desire to achieve something even greater than what she already had in hopes of being remembered. ...read more.

The ant also symbolizes the lack of an individual?s identity. The individuality of ants is lost in their numbers and their common goal of reproducing. For this reason, Myra dreads the monochrome life, where ?men and women sprawling in the streets; puppy dogs in parks; housewives in their kitchens; lovers in their beds??(2) Everyone around her seems to be enjoying a conventional life while she is depressed over her lack of ability to finish her book. This displays the extent to which she wants to be memorable. Instead of appreciating life, she is too busy thinking about what will happen after her death. Myra?s insanity lies in her ability to destroy the book. The ant further symbolizes the devaluation of Myra?s novel. The fact that ?she would tear them up at once?? (2) conveys how significant she thinks the unfinished book is. She feels that it is better to destroy the book herself than to have ?publishers utilizing bits for publicity.? (2) ...read more.

George Eliot?s ?earnest gaze? [and her] manner superior? (2) were also reflected upon Myra; illustrated by her ?arrogant eyes.?(1) Both of these authors share many common characteristics. They both are described as arrogant and searching for recognition. Also, they both have the need to feel superior to others and this is what fuels their motivation as authors. The story suggests that individuals who are so embedded in their personal goals do not have time to enjoy the simplicity of life. 3 In conclusion, Myra?s desire to become immortal through her literature prevents her from living life to its fullest potential. She wants to be unique in a monochrome world and her ambition drives her to insanity and depression. The story suggests that a part of being human is actually accepting that death can come at any moment and that there is nothing that an individual can do to immortalize themselves. Sooner or later, a time will come when individuals are forgotten despite their countless efforts to stay remembered in the world. Instead of worrying about time after death, an individual should live life to their fullest potential. ...read more.