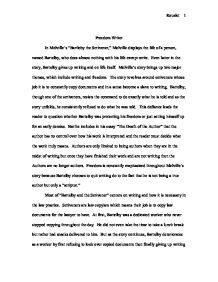 In Melvilles Bartleby the Scrivener, Melville displays the life of a person, named Bartelby, who does almost nothing with his life except write.

Freedom Writer In Melville's "Bartleby the Scrivener," Melville displays the life of a person, named Bartelby, who does almost nothing with his life except write. Even latter in the story, Bartelby gives up writing and on life itself. Melville's story brings up two major themes, which include writing and freedom. The story revolves around scriveners whose job it is to constantly copy documents and in a sense become a slave to writing. Bartelby, though one of the scriveners, resists the command to do exactly what he is told and as the story unfolds, he consistently refused to do what he was told. This defiance leads the reader to question whether Bartelby was protecting his freedom or just setting himself up for an early demise. Barthe includes in his essay "The Death of the Author" that the author has no control over how his work is interpreted and the reader must decide what the work truly means. Authors are only limited to being authors when they are in the midst of writing but once they have finished their work and are not writing then the Authors are no longer authors. Freedom is constantly emphasized throughout Melville's story because Bartelby chooses to quit writing do to the fact that he is not being a true author but only a "scriptor." ...read more.

The scriveners are all slaves to writing because they must spend their time copying documents and don't really do anything else that would lead another person to say the scriveners are living productive lives. But each scrivener exercises a bit of his or her own type of freedom. Turkey works well in the morning but as the day goes on, he tends to make more and more mistakes. The lawyer tries decides to only have Turkey work in the morning but Turkey refuses that request. This refusal shows that Turkey has a certain free will and doesn't just spend his time mindlessly copying documents and doing exactly what the lawyer tells him to do. The much younger Nippers has the opposite problem that Turkey has and he cannot work well in the morning because Nippers needs time to get adjusted for work. At first, Bartelby looks to be the least free scrivener at work because he would work nonstop throughout the day without even taking a lunch break but as the story progressed the reader would see that this is untrue. Bartelby on several occasions refuses to do work for the lawyer and eventually stops writing all together. The lawyer is very curious with Bartelby's response and actually seems to admire his unyielding response to looking over copies. "His steadiness, his freedom from all dissipation, his incessant industry...his great stillness, his unalter- ableness of demeanor under all circumstances, made him a valuable acquisition" (Melville 19). ...read more.

This quote explains that much of writing read through thoroughly but conclusions don't necessary need to be drawn. Reading a work is much different than figuring out a puzzle. To truly grasp writing, a reader must capture the actual literature and realize exactly what each word in the writing is trying to express. The meaning of the work is derived from the ideas of the reader, rather than the thoughts of the writer. The reader has the freedom to capture whatever meaning he desires from a work of writing. Barthes explains that the author cannot put his own opinions into his own work because the reader must come up with his own interpretation of the work. Melville's "Bartelby and the Scrivener" emphasizes this concept by showing the role of a scrivener, who only copies documents and puts nothing of himself into it. Bartelby feels like his life has been wasted just copying documents and finally decides to quit writing. Once Bartelby loses his will to write, he completely loses his will to do anything of importance, even eat. Writing must be entangled like threads of a cloth, and the author must place a limit on how much can be inferred from the text. Bartelby is not an author but only a scriptor because he is not performing art by copying legal documents. This explains why Bartelby believes his life is useless because he wasted it away copying documents. ...read more.