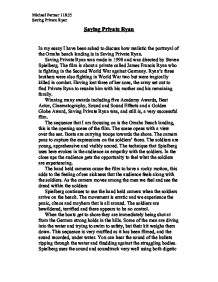 In my essay I have been asked to discuss how realistic the portrayal of the Omaha beach landing is in Saving Private Ryan.

Saving Private Ryan In my essay I have been asked to discuss how realistic the portrayal of the Omaha beach landing is in Saving Private Ryan. Saving Private Ryan was made in 1998 and was directed by Steven Spielberg. The film is about a private called James Francis Ryan who is fighting in the Second World War against Germany. Ryan's three brothers were also fighting in World War two but were tragically killed in combat. Having lost three of her sons, the army set out to find Private Ryan to reunite him with his mother and his remaining family. Winning many awards including five Academy Awards, Best Actor, Cinematography, Sound and Sound Effects and a Golden Globe Award, Saving Private Ryan was, and still is, a very successful film. The sequence that I am focusing on is the Omaha Beach landing, this is the opening scene of the film. The scene opens with a view over the sea. ...read more.

This sequence is very muffled as it has been filmed, and the sound recorded, under water. You can hear the sound of the bullets ripping through the water and thudding against the struggling bodies. Spielberg uses the sound and soundtrack very well using both digetic and non-digetic; for example when you can hear the sound of the waves lapping against the hull of the boats, you can see what is making the sound so that is non-digetic, but when you can't see the source of the particular sound that is digetic. An extremely powerful scene that follows all the action is when the main character Captain Miller, played by Tom Hanks, abruptly loses control of the situation and it is evident he is in shell shock. Again Spielberg uses the very effective technique of making the sound muffled and only letting you see the action and not hear. The camera gets a close up of Millers focusing on his eyes and you can see the fear in them, the camera then pans across all of the action so that the audience can see Captain Miller's point of view. ...read more.

To get the lighting correct is essential in a film of this nature, Spielberg uses low key lighting which shows the gritty realism that he is trying to portray. This is very authentic because in the war this is how it would have been, all of the constant gun fire would have made clouds of smoke, the exploding bombs would have scattered mud and sand everywhere. The film had to be represented this way because so many men and women tragically lost their lives. Mise- �n-scene has been used effectively in this film, for example the costume represents the war and the setting of the scene, Spielberg also had to take special notice of the guns, boats, dialogue etc to make sure that they all fitted in with the 1944 setting. The visual images and sound and sound effects used were so powerful that some of the audience reacted physically to the shock generated by the cinematography. The limited dialogue enhanced the already powerful piece of imagery that was brought to our screens by Spielberg, and therefore gave a very realistic portrayal of the war. Michael Farmer 11R35 Saving Private Ryan ...read more.