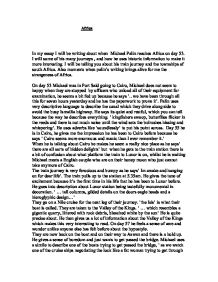 In my essay I will be writing about when Michael Palin reaches Africa on day 53.

Africa In my essay I will be writing about when Michael Palin reaches Africa on day 53. I will some of his many journeys , and how he uses historic information to make it more interesting. I will be telling you about his train journey and the townships of south Africa. Also moments when palin's writing brings alive for me the strangeness of Africa. On day 53 Michael was in Port Said going to Cairo, Michael does not seem to happy when they are stopped by officers who unload all of their equipment for examination, he seems a bit fed up because he says '.. we have been through all this for seven hours yesterday and he has the paperwork to prove it'. Palin uses very descriptive language to describe the canal which they drive along side to avoid the busy Ismailia highway. He says its quiet and restful, which you can tell because the way he describes everything. ' kingfishers swoop, butterflies flicker in the reeds and there is not much noise until the wind sets the bulrushes hissing and whispering'. He uses adverbs like 'soundlessly' to put his point across. ...read more.

Mohammad Ali Abu el Makeran has fourteen children who all live in his house but he apologies for not being able to remember the last five children's names. On day 59 they are travelling to Aswan it is light, soft and gentle, the air is dry and warm. 'Lights grow slowly expands and extinguishing the stars' he is quite descriptive about the sky, also talking about the clouds clearing and being able to see the mountains. There is a bit of irony in that paragraph because someone says ' raindrops keep falling on my head', and Palin say 'im not sure they'd know what a raindrop is round here'. They stop off in a hotel for the night which there is belly dancing which his friend enjoys. When he is in the room he gives information about elephantine Island. He creates humour because he says' least beautiful stretch of the Nile and we have seven hours to enjoy it' which is also creating irony. Palin seems relieved when they are on their way out of Egypt because he says ' we are on our way out of Egypt at last'. ...read more.

The next day they cross the sand to the station, there are around 4000 passengers that could be on the train and then also gives us more information about Khartoum. They have to stop twice because of broken vacuum pipe and engine failure. I think the weirdest part of the train trip is that there are passengers that ride on the top for free. They have the risk of falling off and extremes of heat and cold and blowing sand, but Palin still goes to the top but he was still terrified. I think this is quite strange because the boy he was talking to was surprised that in England people do not ride on the top. Michael creates humour when he says ' .. cannot ride on the top of trains. I explain about bridges'. I find it quite hard to believe that people ride on the top of trains as I am not use to seeing it. In my essay I have told you about what I think is strange about Africa that Palin has told us. Also I told you some of his journeys that he took and what different emotions he went through, and also how he uses historic information to describe places and make them see more interesting. O.lewis ?? ?? ?? ?? ...read more.