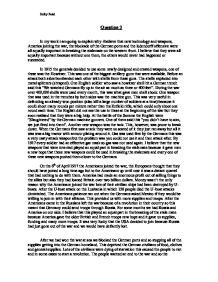 In my work i am going to explain why i believe that new technology and weapons, America joining the war, the blockade of the German ports and the ludendorff offensive were all equally important in breaking the stalemate on the western front.

Question 3 In my work i am going to explain why i believe that new technology and weapons, America joining the war, the blockade of the German ports and the ludendorff offensive were all equally important in breaking the stalemate on the western front. I believe that they were all equally important because without one them, the others would never had happened or succeeded. In 1915 the generals decided to use some newly designed and created weapons, one of these was the Howitzer. This was one of the biggest artillery guns that were available. Before an attack both sides bombarded each other with shells from these guns. The shells exploded into metal splinters (shrapnel). One English soldier who saw a howitzer shell hit a German trench said this "We watched Germans fly up in the air as much as three or 400 feet". During the war over 400,000 shells were used every month, this was what gave men shell shock. One weapon that was used in the trenches by both sides was the machine gun. This was very useful in defending an already won position (also kill a large number of soldiers at a time) ...read more.

After the U-boat attack on the Lusitania in which 128 people died the U-boat attacks diminished. The Americans patience ran out when the Germans asked Mexico if they would be willing to join in with their alliance. This provided us with more supplies and troops. After the Americans came in the Russians left the war because of a revolution in their country so this meant that Germany could send troops through Russia. For some months we had Russia and America on our side. I believe that this played an equal part in the breaking of the stale mate because America gave the older British and French troops new hope and it gave us supplies, funding and many more troops. It was very lucky that the USA decided to join because Russia had just gone out of the war and we would have defiantly lost. After we had won the war at sea we blocked the German ports and so stopping all of the supplies getting into the German homeland. This deprived the German civilians of food, clothes and general supplies. ...read more.

After this win the allies went on to win battles on the solonika front, against the Bulgarian army and the Austrians. While this was going on thousands of German civilians were dying of an outbreak of Spanish influenza. In other parts of Germany revolutions were happening because of ship's crews mutinying. I believe that this was an equal part in the stalemate being broken because it was this attack that actually broke the stalemate when the Germans went over the top and took the English lines. I believe that they all played an equal part in the stalemate being broken because without one thing happening then another may not have happened. Such as if we had never blocked the ports then the German U-boats would have never tried to get out and start to sink the American ships and so the Americans would had never joined at the right time. If that happened and Russia had still gone out, then the Germans may not have used the lundendorff offensive because there would have been no need for it, but then the stalemate may never have been broken. Ricky Patel ...read more.