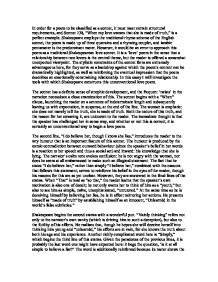 In order for a poem to be classified as a sonnet, it must meet certain structural requirements, and Sonnet 138, &quot;When my love

In order for a poem to be classified as a sonnet, it must meet certain structural requirements, and Sonnet 138, "When my love swears that she is made of truth," is a perfect example. Shakespeare employs the traditional rhyme scheme of the English sonnet, the poem is made up of three quatrains and a rhyming couplet, and iambic pentameter is the predominant meter. However, it would be an error to approach this poem as a traditional Shakespearean love sonnet. It is a 'love' poem in the sense that a relationship between two lovers is the central theme, but the reader is offered a somewhat unexpected viewpoint. The stylistic constraints of the sonnet form are extremely advantageous here, for they serve as a backdrop against which the poem's content can be dramatically highlighted, as well as reinforcing the eventual impression that the poem describes an emotionally constraining relationship. In this essay I will investigate the tools with which Shakespeare constructs this unconventional love poem. The sonnet has a definite sense of strophic development, and the frequent 'twists' in the narration necessitate a close examination of this. The sonnet begins with a "When" clause, launching the reader on a sentence of indeterminate length and subsequently leaving us with expectation, in suspense, at the end of the line. The woman is emphatic: she does not merely tell the truth, she is made of truth. ...read more.

The word is additionally reinforced because its meter shows the only deviation from iambic pentameter in the whole poem. Instead there is a spondee, forcing the reader to pay more attention to what is meant by the use of this word, by slowing down the reading. The phrase "simple truth" also holds a great deal of meaning. If the reader suspected a hint of painful regret among the 'logic games' of earlier lines (particularly in the reference to "false subtleties," which the speaker is so clearly not unacquainted with), now the tone is quite clearly regretful: the "simple truth" is repressed, held back. The phrase is also a paradox, for the poem has committed the reader to a world of intellectual complexity and sophistication, in which "truth" has become elusive and problematical: not simple at all. In this respect, the reader is able to feel the speaker's nostalgic yearning for an innocent world of simple verities. The third stanza begins with questions from the speaker: "But wherefore says she not she is unjust? And wherefore say not I that I am old?" These questions are not asked out of curiosity but posed rhetorically, so that the speaker himself can answer them. Figurative language is used to achieve this: the speaker uses a clothing metaphor when he states that the best covering love can possibly wear (and the best routine behaviour to sustain love between lovers) ...read more.

It highlights a universal tenet: that deceits exist in every relationship, be they "little white lies" or instances of infidelity. At times throughout the poem the speaker seems to be trying to "teach" the reader something: take, for example, the rhetorical questions asked at the beginning of the third stanza. They are aimed at producing an effect on listeners, and contribute greatly to the sense that, in retrospect, the entire poem seems to be something of a performance: aimed at an audience, rather than at the speaker's "love." Perhaps, then, the poem is partly a lesson in morality, taught by someone who has experienced firsthand the unseen, but potentially destructive damage that deceit in a relationship can cause. Sonnet 138 - William Shakespeare When my love swears that she is made of truth, I do believe her, though I know she lies, That she might think me some untutored youth, Unlearn�d in the world's false subtleties. Thus vainly thinking that she thinks me young, Although she knows my days are past the best, Simply I credit her false-speaking tongue: On both sides thus is simple truth suppressed. But wherefore says she not she is unjust? And wherefore say not I that I am old? Oh, love's best habit is in seeming trust, And age in love loves not to have years told. Therefore I lie with her and she with me, And in our faults by lies we flattered be. ...read more.