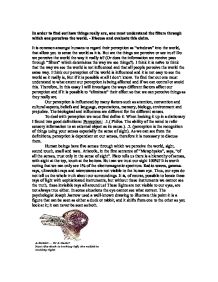 In order to find out how things really are, one must understand the filters through which one perceives the world - Discuss and evaluate this claim.

In order to find out how things really are, one must understand the filters through which one perceives the world. - Discuss and evaluate this claim. It is common amongst humans to regard their perception as "windows" into the world, that allow you to sense the world as it is. But are the things we perceive or see true? Do we perceive the world the way it really is? (Or does the information we receive pass through "filters" which determines the way we see things?). I think it is na�ve to think that the way we see the world is not influenced and that all people perceive the world the same way. I think our perception of the world is influenced and it is not easy to see the world as it really is, But if it is possible at all I don't know. To find that out one must understand to what extent our perception is being affected and if we can control or avoid this. Therefore, In this essay I will investigate the ways different factors affect our perception and if it is possible to "eliminate" their effect so that we can perceive things as they really are. Our perception is influenced by many factors such as attention, convention and cultural aspects, beliefs and language, expectations, memory, biology, environment and prejudice. ...read more.

Literate man said, "seeing is believing"; "Believe half of what you see and nothing what you hear. I agree with the first part, but the second I think is meant for the content in what we hear and not the sounds we hear, we can only hear frequencies between 16 and 20 000 Hz. Dogs can hear sounds beyond this, but we cannot and there is nothing we can do to about this limitation. Sight and sound are the senses that accounts most of our perception, and it is alarming to see how much these are affected by things we cannot control. The other senses also have limitations. In touch, regions of the body differ in sensitivity. And in smell, only molecules that our soluble in our nasal much can be smelled. These biological limitations are something we cannot control or eliminate. Attention is one of many things that affects our perception, when we draw our attention to something we perceive it better and at the same time we do not perceive other things (e.g. sounds) as well as the thing our attention is on. For example, the bat is the only bird that milks her children at the same time as flying. If we know this and draw our attention to this and try to see this, we will see it sooner than we would if we didn't know this. ...read more.

For example if a person knows a language and then forgets it he/she will learn that language much faster and better than a person who doesn't know the language at al. because the language is in her/him. Memory. Biology we covered the biological influences under the description of the senses. These are the physical limitations to our sense. The environment effects the shortness of our senses. A blind person uses his/her other senses such as smell, hearing, touching better than a healthy person and his/her other sense are sharpened as these must compensate for his/her dysfunctional eye. The influence of prejudice is much like that of expectation. If we are prejudice to think that a certain animal smells that that good we will detect this smell faster than if we didn't have this prejudice. Attention, convention and cultural aspects, Belief and language, expectations, interest, memory, environment, prejudice and biological limitations all influence our perception. If we try very hard we might be able to overcome some of the influences such as prejudice, interest, and attention. But belief and language and biological limitations are influences that are impossible to control. Therefore it is fair to conclude that it is beyond our power to know the whole truth about the world around us even if we "understand the filters through which we perceive the world. ...read more.