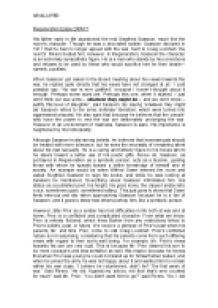 In &quot;Regeneration&quot;, Sassoon the character is an extremely sympathetic figure. He is a man who stands by his convictions

﻿ARSAL JAVED Regeneration Essay DRAFT His father early in life abandoned the real Siegfried Sassoon, much like the novel?s character. Though he was a decorated soldier, Sassoon declared in 1917 that he had no longer agreed with the war. Sent to Craig Lockhart, the real Dr. Rivers treated him. However, In Regeneration, Sassoon the character is an extremely sympathetic figure. He is a man who stands by his convictions and refuses to be used by those who would sacrifice him for their ideals?namely, pacifists. When Sassoon got asked in the Board meeting about his views towards the war, he replied quite directly that his views have not changed at all. ?I cant possibly say, ?No war is ever justified?, because I haven?t thought about it enough. Perhaps some wars are. Perhaps this one, when it started. I just don?t think our war aims ? whatever they might be ? and we don?t know ? justify this level of slaughter?, said Sassoon. By saying ?whatever they might be? Sassoon refers to the aims, defense/ liberation, which were turned into aggression/conquest. ...read more.

However, Billy Prior as a soldier has had difficulties in life both at war and at home, Prior is a conflicted and complicated character. From what we know, Prior is entirely fictional, which frees Barker from any restrictions linked to Prior's beliefs, past, or future. We receive a glimpse of Prior's past when his parents, Mr. and Mrs. Prior, come to visit Craig Lockhart. Prior's conflicted nature is not surprising, considering that his parents come from such differing views with regard to their son's well being. For example, Mr. Prior?s views towards his son are very rigid. This is because Mr. Prior desired his son to be more courage?s and less sensitive as well, this maybe because he knows that when Prior was young he could not stand up for himself when bullied, and when he joined the army he was not happy about it and wanted him to remain within his own class. ?I believe he volunteered, didn?t he? The first week of war.? Said Rivers. ?He did. Against my advice, not that that?s ever counted for much? said Mr. ...read more.

He is in many ways a self-absorbed character; he cares first and foremost about his own recovery and his own experiences. Lastly this just goes to tell us that Prior in Regeneration is portrayed, as a realistic character even due it?s a fictional. It also goes to show that Barker wanted to express Prior?s character so that the impact upon the readers is realistic and sympathetic. In my conclusion I would like to say that Pat Barker presented Sassoon as a symbolic character because everyone look unto Sassoon as his or her friend because of his nature. Another reason would be that even though Sassoon is sane he does blend in with the other patients (even though he finds it complicated) and express their feelings and emotions and sympathies with them. Above all, Sassoon acts as a teacher guiding those with whom he speaks toward a better knowledge of himself and of society. Sassoon refers Rivers as a ?fatherly figure? due to the importance he gives to his patients. However, Billy prior is presented in Regeneration as a realistic character because even though he is fictional, she wanted to emphasize the point on how men those days felt emasculated and psychologically restrained from the war. ...read more.