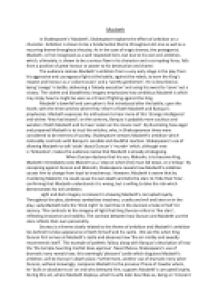 In Shakespeares Macbeth, Shakespeare explores the effect of ambition on a character.

﻿Macbeth In Shakespeare?s ?Macbeth?, Shakespeare explores the effect of ambition on a character. Ambition is shown to be a fundamental theme throughout Act one as well as a recurring theme throughout the play. As in the case of tragic dramas, the protagonist, Macbeth, is first recognised as a well respected hero, but due to his own evil ambition, which, ultimately, is shown to be a serious flaw in his character and a corrupting force, falls from a position of great honour or power to his destruction and shame. The audience realises Macbeth?s ambition from a very early stage in the play from his aggressive and courageous fight at the battle, against the rebels, to earn the King?s respect and honour as a ?valiant cousin? and a ?worthy gentlemen?. He is described as being ?savage? in battle, delivering a ?b****y execution? and using his sword to ?carve? out a victory. The violent and bloodthirsty imagery emphasizes how ambitious Macbeth is which may imply how he might be seen as a threat if fighting against the King. ...read more.

The contrast between how Duncan and Macbeth use the stars reflects their own personality. Secrecy is a theme closely related to the theme of ambition and Macbeth’s ambition lies behind his false appearance of both himself and his castle. We see this when King Duncan first arrives at Macbeth’s castle and observes how ‘the air nimbly and sweetly recommends itself’. This example of pathetic fallacy along with Banquo’s description of how the ‘the temple-haunting martlet does approve’. Nevertheless, Shakespeare’s use of dramatic irony reveals how, this seemingly ‘pleasant’ castle which disguises Macbeth’s ambition, will be Duncan’s death place. Furthermore, another use of dramatic irony when Duncan, without knowingly, compares Macbeth to the previous Thane of Cawdor whom, he ‘built an absolute trust’ on and who betrayed him, supports Macbeth’s corrupted loyalty. During this act, where Macbeth displays, what his wife later describes as, being an ‘innocent flower’ on the surface, but a ‘serpent under’t’, the audience may feel sympathy towards the naïve and overly-trusting King whilst being disgusted at Macbeth’s cruel ambition. ...read more.

This moral quandary makes Macbeth more vulnerable and dependent on others, as he himself is indecisive and, eventually, allows Lady Macbeth to influence her husband into being ambitious again. In Act 1 of Macbeth, Shakespeare explores the negative impacts of ambition on a character. He demonstrates how ambition is a corrupting force which destroys loyalty, and this is shown through Macbeth?s deceit of Duncan. He also portrays how ambition leads a person to become morally indecisive and forces them choose choices that they would not necessarily choose if they were in a clearer state of mind. However, Shakespeare explains how Macbeth?s downfall is his own responsibility, for he deliberately chooses to listen to the witches, whereas, his more sensible friend, Banquo did not. Although Lady Macbeth and the witches attack his weaknesses, such as his courage and manhood it should be clear that it is Macbeth who first considers murder and writes to his wife about his plans. In his prophecy the witches do not even mention murder and it is him that comes up with the idea. Therefore, Macbeth is entirely to blame for his downfall due to his ambition which causes his death and shame. ...read more.