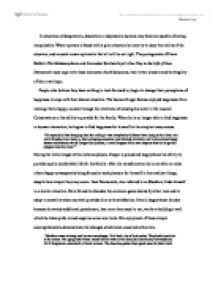 In situations of desperation, desolation or depression humans may become capable of acting inexplicably.

In situations of desperation, desolation or depression humans may become capable of acting inexplicably. When a person is faced with a grim situation he may try to deny the reality of the situation, and as such remain optimistic that all will be set right. The protagonists of Franz Kafka's The Metamorphosis and Alexander Solzhenitsyn's One Day in the Life of Ivan Denisovich must cope with these elements of self-delusions, their bitter wisdom and the fragility of their own hope. People who believe they have nothing to look forward to, begin to change their perceptions of happiness to cope with their dismal situation. The human Gregor Samsa enjoyed happiness from making others happy, as seen through his intentions of sending his sister to the musical Conservatory or his ability to provide for his family. When he is no longer able to find happiness in human interaction, he begins to find happiness for himself in the simplest occurrences. "He especially liked hanging from the ceiling it was completely different from lying on the floor; one could breathe more freely; a faint swinging sensation went through the body; and in the almost happy absent-mindedness which Gregor felt up there, it could happen to his own surprise that he let go and plopped onto the floor." ...read more.

Thoughts like these, completely useless in his present state, went through his head as he stood glued to the door."1 His motivation has been fulfilling the financial and emotional needs of his family put forth on him, but he is no longer needed by his family. The Samsa family is now capable of surviving without his contributions, and seemingly are better people as they become independent. As the bug he is a burden to his family because his purpose in life has been made impossible to fulfill. Unlike Gregor, Ivan believes that he has a purpose (to work with his hands) but he is unable to because of an unfair conviction. "Easy money doesn't weigh anything and it doesn't give you that good feeling you get when you really earn it. The old saying was true-what you don't pay for honestly, you don't get good value for. Shukhov's hands were still good for something. Back home he'd surely find himself work making stoves, or something in the carpentry line, or mending pots and pans. The only catch was- if you'd been convicted with loss of civil rights, you couldn't get work anywhere and you weren't allowed back home."2 Ivan is proud of the work he does with his hands but he is not permitted to choose his living because of the sentence. ...read more.

You finished a ten-year stretch and they gave you another one. Or if not, they still wouldn't let you go home. But sometimes you got a kind of funny feeling inside. Maybe your number really would come up one day. God, just to think you might walk out and go home!" 2 Ivan realizes that he will never have freedom yet wants nothing more than being released from prison. Restraining his hopes with a touch of reality enables him to find a balance between escape and contentment during his sentence. It is difficult to be truly happy when keeping the dismal reality in mind. The protagonists find their lives are worse because they know it is not possible to find the happiness they once had. Despite this knowledge, they maintain the hope of returning to normal for as long as they can. This hope serves to protect the potentially false happiness they experience. Both characters are described as being almost happy because, despite their self-delusions, they can only obtain true happiness if their lives were to return to the way they once were; but that is unfeasible. 1 Kafka, Franz. The Metamorphosis. Toronto: Bantam Books (classic edition), 1986. 2 Solzhenitsyn, Alexander. One Day in the Life of Ivan Denisovich. New York: Bantam Books, 1963. ...read more.