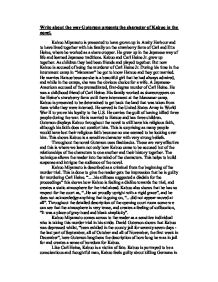 In &quot;Snow Falling on Cedars,&quot; write about the way Guterson presents the character of Kabuo in the novel.

Write about the way Guterson presents the character of Kabuo in the novel. Kabuo Miyamoto is presented to have grown up in Amity Harbour and to have lived together with his family on the strawberry farm of Carl and Etta Heine, where he worked as a share cropper. He grew up in the Japanese way of life and learned Japanese traditions. Kabuo and Carl Heine Jr. grew up together. As children they had been friends and played together. But now Kabuo is accused of being the murderer of Carl Heine Jr. During his time in the internment camp in "Manzanar" he got to know Hatsue and they got married. He marries Hatsue because she is a beautiful girl that he had always admired, and while in the camps, she was the obvious choice for a wife. ...read more.

These are very effective and this is where we learn not only how Kabuo came to be accused but of the relationships of the characters to one another and their history together. The technique allows the reader into the mind of the characters. This helps to build suspense and intrigue the audience of the novel. Kabuo Miyamoto is described as a criminal from the beginning of the murder trial. This is done to give the reader gets the impression that he is guilty for murdering Carl Heine. "....his stillness suggested a disdain for the proceedings" this shows how Kabuo is feeling a dislike towards the trial, and creates a static atmosphere for the trial ahead. Kabuo also shows that he has no respect for the court as, "..He sat proudly upright with a rigid grace", and he does not acknowledge anything that is going on, "...did not appear moved at all". ...read more.

He had, after all, chosen to serve his country out of a desire to prove his loyalty. Still, Kabuo condemns himself for these wartime killings, believing that the guilt will remain with him even after his death. Kabuo's feeling of guilt is so distinct that it haunts him in the same way that Hatsue's rejection and the war haunt Ishmael. Though he is innocent of killing Carl Heine, Kabuo does not feel self-pity about his wrongful imprisonment. Rather, he accepts his trial and potential death sentence as a form of cosmic justice for his earlier murders in the war. However, he has no confidence in this system of justice and lies to his attorney because he does not think anyone will believe him. Though Kabuo certainly wants to live, since he loves and appreciates his family, he is not even sure he deserves to be free. In effect, Kabuo puts himself at the mercy of chance because he does not believe in his own right to decide his future. ...read more.