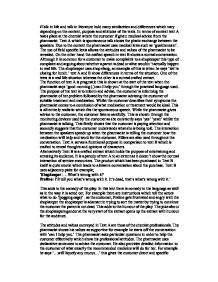 In terms of context text A takes place at the chemist where the customer if given medical advice from the pharmacist. Text A which is spontaneous talk shows the phatic exchange between the speakers.

#Talk in life and talk in literature hold many similarities and differences which vary depending on the context, purpose and attitudes of the texts. In terms of context text A takes place at the chemist where the customer if given medical advice from the pharmacist. Text A which is spontaneous talk shows the phatic exchange between the speakers. Due to the context the pharmacist uses medical lexis such as 'guaithenesin'. The use of field specific lexis allows the attitudes and values of the pharmacist to be revealed. On the other hand the crafted speech in text B shows a surreal conversation. Although it is common for a customer to make complaints to a shopkeeper this type of complaint and arguing about whether a parrot is dead or alive wouldn't actually happen in real life. The shopkeeper uses shop slang, an example of this is when he says 'we're closing for lunch.' text A and B show differences in terms of the situation. One of the texts is a real life situation whereas the other is a surreal crafted extract. ...read more.

Text A serves a functional purpose in comparison to text B which is crafted to reveal thoughts and opinions of characters. Alternatively Text B is a crafted extract which holds the purpose of entertaining and amusing its audience. It is a parody of text A to an extent as it doesn't show the normal interaction of service encounters. The product which has been purchased in Text B itself is quite exotic which leads to a bizarre conversation about the purchase. Text B uses adjacency pairs for example; 'Shopkeeper: ...What's wrong with it? Praline: I'll tell you what's wrong with it. It's dead, that's what's wrong with it.' This adds to the comedy of the play. In this text there is comedy in the language as well as in the way it is acted out. For example there are instructions which tell the actors what to do '(jogging cage)' . as the customer, Praline gets frustrated and angry with the shopkeeper the shopkeeper is adamant in trying to sort the matter by trying to convince the customer the parrot is not dead. ...read more.

On the other hand text B is a comical contrast. This puts the audience between the shopkeeper adamantly repeating how the parrot is in good condition and the customer who takes on a negative approach of the parrot/product. The shopkeepers positive perceptions and attitudes towards the parrot is shown in the language used. For example 'beautiful bird, lovely plumage.' The shopkeeper uses this perception to overlook the customer's complaint and continues to compliment the beauty of the parrot. This contradicts the customer's comments about the parrot which consist of terms such as 'That parrot is definitely deceased.' the skilful use of repetition emphasized on the humour and comedy of the extract. There is a clear comparison between spontaneous talk and crafted speech. The most simple difference is that the talk in literature is crafted to fit its purpose in its original text. Also the real life speech will be less fluent than the crafted literature text. The frequent hesitation and fillers used by the customer in text A show the naturalistic tone of the conversation. In text A clearly the pharmacist dominates the conversation as he is giving the advice and information to the customer which shows a status difference between the speakers. ...read more.