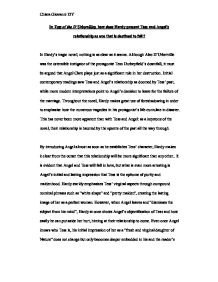 In Tess of the DUrbervilles, how does Hardy present Tess and Angels relationship as one that is destined to fail?

In Tess of the D'Urbervilles, how does Hardy present Tess and Angel's relationship as one that is destined to fail? In Hardy's tragic novel, nothing is as clear as it seems. Although Alec D'Urberville was the ostensible instigator of the protagonist Tess Durbeyfield's downfall, it must be argued that Angel Clare plays just as a significant role in her destruction. Initial contemporary readings saw Tess and Angel's relationship as doomed by Tess' past, while more modern interpretations point to Angel's decision to leave for the failure of the marriage. Throughout the novel, Hardy makes great use of foreshadowing in order to emphasise how the numerous tragedies in his protagonist's life cumulate in disaster. This has never been more apparent than with Tess and Angel: as a keystone of the novel, their relationship is haunted by the spectre of the past all the way through. By introducing Angel almost as soon as he establishes Tess' character, Hardy makes it clear from the outset that this relationship will be more significant than any other.. It is evident that Angel and Tess will fall in love, but what is even more arresting is Angel's initial and lasting impression that Tess is the epitome of purity and maidenhood. ...read more.

Hardy even points out that during Angel's initial reaction to Tess' history, he still felt enough of a "back current of sympathy through which a woman of the world might have conquered him", but she takes his emotional confusion as a final judgement, simply because she continues to see him as so superior to her. With the phrase "woman of the world", Hardy brings attention to Tess' pitiful lack of experience concerning men and relationships: he highlights how submissive Tess is that she will not attempt to change Angel's mind, but also how pure and innocent she remains, that she will not use "her exceptional physical nature" in order to convince him to stay. However, through the use of the abstract noun "current", the novelist implies that Angel's emotions are transient and ever-shifting, portraying him as unreliable and untrustworthy. Angel's idealism continues to be an important factor of the developing romance, creating the impression that the whole relationship is a fa�ade. During the idyllic early morning meetings, Hardy illustrates a hazy new transitional world "in that strange and solemn interval, the twilight of the morning" to mirror Angel's rose-tinted and not entirely clear vision of Tess. The author continually uses a semantic field of religious references to illustrate the significance of certain moments. ...read more.

signifies not only how Tess is morally dead to him, but how he feels his actions have killed the spirit and love within his "'poor, poor Tess'". Even though Tess suspects multiple times that Angel's actions could lead to her death, either intentionally or accidentally, "self-solicitude was near extinction in her", linking to how she remains placid and uncomplaining even throughout temptation and harsh conditions at Flintcombe-Ash. When Angel "carefully laid" her in the open coffin, Hardy is symbolising that due to Tess' devotion to Angel, she will allow herself to be led to her death, arguably the greatest moment of symbolism in the novel. In Tess of the D'Urbervilles, Hardy as the omniscient narrator remains firmly on the side of his protagonist: she is the vehicle for him to express his contempt of the traditionally misogynistic values so strongly upheld by Victorian society. Although Angel professes to reject these conventions, he ultimately submits to them, thus creating an even greater divide between the two lovers. In her final hours, Tess herself states that her happiness with Angel "could not have lasted" and that it was better that she would be gone, fulfilling Hardy's portrayal of a love that was sincere, almost ethereal, but lavished on a fallible, human man, and therefore inevitably doomed to fail. 1383 words Chiara Giovanni 12Y ...read more.

An excellent essay. It remains focused on the title throughout, and each paragraph builds on the previous one to create a convincing argument. The writer has a really thorough knowledge of textual detail, and makes highly effective use of brief quotation to support the points being made. In addition, the writer has an excellent general and technical vocabulary, which help to create a sophisticated and persuasive response.