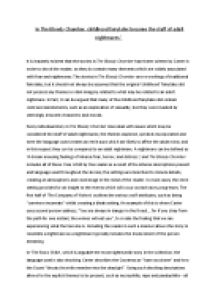 'In The b****y Chamber, childhood fairytales become the stuff of adult nightmares.' How far do you agree with this statement.

﻿In The b****y Chamber, childhood fairytales become the stuff of adult nightmares.? It is instantly evident that the stories in The b****y Chamber have been written by Carter in order to shock the reader, as they do contain many elements which are widely associated with fear and nightmares. The stories in The b****y Chamber are re-workings of traditional fairytales, but it should not always be assumed that the original ?childhood? fairytales did not possess any themes or dark imagery related to what may be related to an adult nightmare. In fact, it can be argued that many of the childhood fairytales did contain controversial elements, such as an exploration of sexuality, but they were masked by seemingly innocent characters and morals. Every individual story in The b****y Chamber does deal with issues which may be considered the stuff of adult nightmares; the themes explored, symbols incorporated and even the language used creates an eerie aura which are likely to affect the adult mind, and in this respect they can be compared to an adult nightmare. A nightmare can be defined as ?A dream arousing feelings of intense fear, horror, and distress.?, and The b****y Chamber includes all of these. Fear is felt by the reader as a result of the intense descriptions present and language used throughout the stories; the settings are described to minute details, creating an atmospheric and vivid image in the mind of the reader. ...read more.

When considering the makings of both a childhood fairytales and adult nightmares, it becomes clear that both deal with similar issues. Carter writes in the introduction to The b****y Chamber that ?I was taking the latent content of those traditional stories and using that; and the latent content is violently s****l?. She is stating how rather than writing adult ?versions? of the stories, she has in fact exposed the dark themes which are explored in fairytales, but masked by their childhood associations. At first it may seem like there is an opposition between both childhood fairytales and adult nightmares, but in fact they are similar and rather than having been transformed into adult nightmares, they are being revealed as adult nightmares. One example of this is ?Bluebeard?, the fairytale which ?The b****y Chamber? is linked to. The original fairytale should not be classes as childish as it is about a young girl who is married to a wealthy aristocrat who has a dark secret - he murders his wives and hangs them from hooks upon walls. Carter extracts the narrative from this story but builds upon it, as she links the adult themes and fairytale together, extracting the shocking latent content from ?Bluebeard?, allowing it to form a whole new story which is a comment on gender complying with her feminist views, as it portrays the objectification of women. ...read more.

In some cases, this innocent attraction to the powerful male character can lead to their downfall, which is displayed in ?The Erl-King?. This sense of doom is present in other gothic texts such as ?Frankenstein?, where Victor?s actions lead to the creation of a monster which he cannot control. The novel was based on a nightmare that Shelley had and in that respect, it can be stated that all features of gothic literature can be considered the stuff of adult nightmares. Some may argue that the fairytales which Carter has based her stories around, are in fact pieces of gothic literature themselves as they contain all the elements of the gothic. After analysing both The b****y Chamber and traditional ?childhood? fairytales, we can see what Carter believed ? that the fairytales had already held the stuff of adult nightmares. They contain adult themes and underlying content which already shows a male dominance in society. Although The b****y Chamber contains many elements which are widely associated with adult nightmares, the original fairytales do too. For example, ?Little Red Riding Hood? and even other tales not explored such as ?The Pied Piper? portray the dark side or human nature, as does Carter?s collection as they allow for a grim depiction of realism; the only true difference is the language used which is due to the intended audiences. It would not be entirely correct to say that childhood fairytales have become the stuff of adult nightmares, as what Carter has done is made the content explicit: she uncovers it and reveals it for the reader. ...read more.