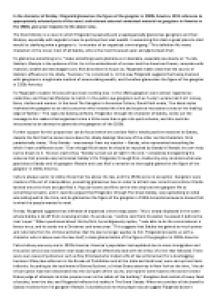 In the character of Gatsby, Fitzgerald glamorises the figure of the gangster in 1920s America. With reference to appropriately selected parts of the novel, and relevant external contextual material on gangsters in America in the 1920s, give your response to the above view.

Transfer-Encoding: chunked ﻿In the character of Gatsby, Fitzgerald glamorises the figure of the gangster in 1920s America. With reference to appropriately selected parts of the novel, and relevant external contextual material on gangsters in America in the 1920s, give your response to the above view. The Great Gatsby is a novel in which Fitzgerald repeatedly and unapologetically glamorises gangsters and their lifestyle, especially with regards to how he portrays their vast wealth. In examining this claim a good place to start would be clarifying what a gangster is: ?a member of an organised criminal gang.? This definition fits many characters in the novel, most of all Gatsby, who is the most focussed upon and glamorised of all. To glamorise something is to, ?make something seem glamorous or desirable, especially spuriously so.? Surely Gatsby?s lifestyle is the epitome of this. He is the embodiment of success and the American Dream, complete with mansion, wealth and extravagant cars. Nick describes his house as, Fitzgerald makes clear that the source of Gatsby?s affluence is the shady, ?business,? he is involved in. In this way Fitzgerald suggests that being involved with gangsters is a legitimate method of accumulating wealth, and therefore glamorises the figure of the gangster in 1920s America. ...read more.

Police bribery was very real in 1920s America. America’s population had exploded due to mass immigration and the police service was nowhere near large enough to effectively deal with the influx of crime that followed. There were even cases of policemen such as Roy Olmstead who traded a life of law enforcement for a bootlegging business. Many law enforcers in the Bureau of Prohibition and at the state and local level, were corrupt and took briberies. According to the testimony of Emory Buckner, a United States attorney in New York at the time, “the air of corruption had even descended into the civil parts of the courts, and reports were made to the senior United States judge of attempts to bribe jurymen even in the toilets of the building.” Gangsters had control of every facet of society, even the law, and Fitzgerald reflects this reality in The Great Gatsby. When we consider all the benefits Gatsby receives from his gangster lifestyle, it dumbfounds me that people would suggest Fitzgerald doesn’t glamorise it. However, those that oppose my claim would argue that Fitzgerald does not glamorise gangsters, and there is some merit to this interpretation, especially when we consider that Gatsby’s wealth is only a façade for a much shadier underworld. ...read more.

Nick observes that, ?I could see nothing sinister about him.? It could be argued that Gatsby was exploited by men like Wolfsheim ? after all, he just uses Gatsby for his own ends and doesn?t even attend his funeral. To quote Virginia Lee, ?Gatsby retains a purity of heart that transcends the corruption.? This does not glamorise gangsters ? it shows them for what they really are. They care for nothing but money and are prepared to exploit dreamers like Gatsby for their own gains. In the 1920s gangsters were known to exploit legitimate businessmen through a method called racketeering. This type of crime involved the infiltration of gangsters into legitimate business and then making violent threats towards the owner. Anybody who was confronted by a gangster wanting in on their business knew they must yield in fear of being executed. Perhaps this is what happened to Gatsby, and he knows he cannot escape from his life of crime for fear of being killed, which is not at all glamorous. To conclude, after careful consideration we determine that Fitzgerald certainly glamorises the figure of the gangster in 1920s America. We see this reflected throughout the novel, and in the popular culture. The opposing arguments have some merit but ultimately they fail to realise the true implications and context of The Great Gatsby. ...read more.