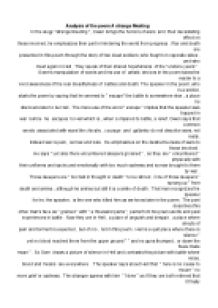 In the elegy &quot;strange Meeting &quot;, Owen brings the horrors of wars and their devastating effect on those involved, he emphasizes their part in hindering the world from progress

﻿Analysis of the poem A strange Meeting In the elegy "strange Meeting ", Owen brings the horrors of wars and their devastating effect on those involved, he emphasizes their part in hindering the world from progress . War and death are presented in this poem through the story of two dead soldiers ,who fought on opposite sides , and who meet again in h**l . They speak of their shared hopefulness of the "undone years " . Owen's manipulation of words and his use of artistic devices in the poem takes the reader to a vivid awareness of the real dreadfulness of battles and death. The speaker in the poem ,who is a soldier, starts the poem by saying that he seemed to " escape" the battle to somewhere else , a place he discovers later to be h**l . The mere use of the word " escape " implies that the speaker was trapped in war before he escapes to h**l which is , when compared to battle, a relief. ...read more.

h**l is a quit place where there is silence " yet no blood reached there from the upper ground " " and no guns thumped , or down the flues made moan " . So Own draws a picture of silence in h**l and contrasts this picture with battle where noise, blood and moans are everywhere . The speaker says about h**l that " here is no cause to mourn " no more grief or sadness . The stranger agrees with him " None " as if they are both relieved that it finally Al Neghaimshi 2 ended , finally they will rest . " Save the undone years , the hopelessness " This is their only regret . They shared so many in the past , the two of them , similar lives , experiences and similar horrors and pains that they could be called "friends " in spite of the fact that they are actually strangers . "Strange Friend " as paradoxical as it seems but still true , " Whatever hope is yours , was my life also " . ...read more.

" I am the enemy you killed , my friend " a beautiful line towards the end of the poem . Although we stand in life different and enemies , but we shared the same experience and will share the same destiny . He closes the poem by saying " let us sleep now .." let us finally rest and forget the horrors and pains . So ironic of Owen to let his protagonist finally rest in " h**l" . Aren't people who fight for their countries are supposed to be martyrs and go to Heaven ? It is Owen's way of doubting the cause which wars stand for , the cause after all is false . Owen by letting his two protagonist rest in h**l , he also conveys the message that Mankind must seek reconciliation , stop this bloodshed , they must embrace pity and love for each other . Owen writes this beautiful elegy that talks about war and death , but what is most ironical is that he himself dies in war . ...read more.