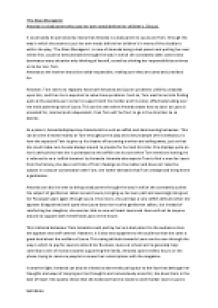 In The Glass Menagerie Amanda is a bad parent who puts her own needs before her childrens. Discuss.

﻿?The Glass Menagerie? Amanda is a bad parent who puts her own needs before her children?s. Discuss. It could easily be perceived by many that Amanda is a bad parent to Laura and Tom, through the way in which she seems to put her own needs before her children?s in many of the situations within the play, ?The Glass Menagerie?. A case of Amanda being a bad parent and putting her own needs first, could be demonstrated through the way in which she constantly takes control and dominates every situation only thinking of herself, as well as shirking her responsibilities at times on to her son, Tom. Amanda as the mother should be solely responsible, making sure they are cared and provided for. However, Tom seems to regularly have both Amanda and Laura?s problems unfairly unloaded upon him, and then he is expected to solve these problems. ...read more.

Amanda also expects Tom to find a man for Laura from the factory; she does not think of Tom?s feelings on the matter and does not raise the subject in a way of conversation with Tom, she rather demands that Tom arrange and bring home a gentleman. Amanda can also be seen as being a bad parent through the way in which she constantly pushes the subject of gentlemen callers around Laura, bringing up her own past and seemingly living out her Pyounger years again through Laura. Once more, she portrays a very selfish attitude when she appears disappointed and upset that Laura does not receive gentlemen callers, but instead of comforting her daughter, she worries that no one will want Laura and there will not be anyone around to support both herself and Laura in the future. ...read more.

Although Amanda?s intentions are pure for both Laura and Tom, it is easy to see how she can be viewed as a bad parent, since her fear of being left on her own or not provided for, puts her own needs before her children?s. Amanda should have taken in to account that Tom is a young man, and instead of trying to sort out his sister and her life, Amanda should have allowed him to live his own life and follow his own dreams. Just as instead of meddling, Amanda should have left Laura?s love life up to fate and not taken it on as a hobby, which turned into an unhealthy obsession to find Laura a man. Amanda should have just accepted and loved her children for who they were and never should have expected any more or any less. Sarah Barnes ...read more.