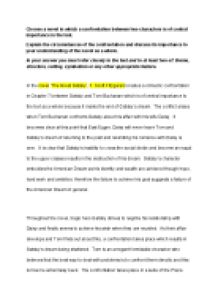 In The Great Gatsby Fitzgerald creates a climactic confrontation in Chapter 7 between Gatsby and Tom Buchanan which is of central importance to the text as a whole because it marks the end of Gatsbys dream.

Transfer-Encoding: chunked ﻿Choose a novel in which a confrontation between two characters is of central importance in the text. Explain the circumstances of the confrontation and discuss its importance to your understanding of the novel as a whole. In your answer you must refer closely to the text and to at least two of: theme, structure, setting, symbolism or any other appropriate feature. In the novel ?The Great Gatsby?, F. Scott Fitzgerald creates a climactic confrontation in Chapter 7 between Gatsby and Tom Buchanan which is of central importance to the text as a whole because it marks the end of Gatsby?s dream. The conflict arises when Tom Buchanan confronts Gatsby about his affair with his wife Daisy. It becomes clear at this point that East Egger, Daisy will never leave Tom and Gatsby?s dream of returning to the past and rekindling his romance with Daisy is over. It is clear that Gatsby?s inability to cross the social divide and become an equal to the upper classes results in the destruction of his dream. Gatsby?s character embodies the American Dream as his identity and wealth are achieved though hope, hard work and ambition; therefore the failure to achieve his goal suggests a failure of the American Dream in general. ...read more.

The heat is also used here to create a sense of disorientation and confusion as Nick tells us that the ?relentless beating heat was beginning to confuse me? which further creates a sense of disorder and turmoil increasing the sense of pressure building to the point of combustion. Furthermore in the novel, the setting of New York represents wild, selfish, immoral behaviour - already illustrated by the fact that it is the setting for Tom and Myrtle?s extra-marital affair ? which makes it an appropriate place for Tom to confront Gatsby about his affair. Fitzgerald?s use of setting creates a sense of foreboding indicating that the confrontation will cruelly destroy Gatsby?s dream. The central concern of the novel which leads to the pivotal confrontation is Gatsby?s desperate desire to recreate the past and be with Daisy is symbolised by the green light, which in turn represents the American Dream. When we are first introduced to Gatsby?s character in the opening chapter, he is seen as a lonely figure reaching out towards a ?single green light? and his desperate longing is conveying by the fact that he is ?trembling?. Gatsby?s powerful desire is clear here as this is the first thing we learn about him and contrasts starkly with the lack of motivation and drive apparent in the wealthy East Eggers. ...read more.

Subsequently Daisy retreats to protection of her mansion and Gatsby once again returns to his isolated vigil waiting ?all night, if necessary? on Daisy just as he was introduced in the opening chapter. Pathos is created as Nick emphasises the futility of Gatsby?s wait as he describes leaving him ?watching over nothing?. It is clear to the reader that Daisy has returned to the security of Tom and his ?old money? wealth, finally signalling the end of Gatsby?s dream although Gatsby still holds onto hope. Therefore the confrontation between Tom and Gatsby in Chapter 7 of the The Great Gatsby is important because it leads to the destruction of Gatsby?s dream and his eventual demise. It also effectively reveals Daisy?s shallowness and materialism. Once Gatsby?s illusionary persona is shattered and the reality is exposed by Tom Buchanan, Daisy rejects Gatsby and returns to her husband showing her lack of care for Gatsby. Ultimately the confrontation results in the tragic conclusion to the novel where Gatsby dies because of his desperate desire for Daisy. Gatsby?s character embodies the idea of the American Dream which is revealed by Fitzgerald to be corrupted by money and the pursuit of wealth. Tragically Gatsby?s great optimism and determination were unable to surmount the great social divide and achieve his dream of Daisy. ...read more.