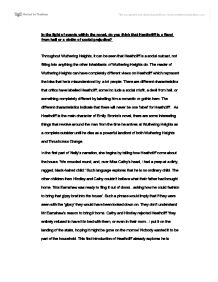 In the light of events within the novel, do you think that Heathcliff is a fiend from h**l or a victim of social prejudice?

In the light of events within the novel, do you think that Heathcliff is a fiend from h**l or a victim of social prejudice? Throughout Wuthering Heights, it can be seen that Heathcliff is a social outcast, not fitting into anything the other inhabitants of Wuthering Heights do. The reader of Wuthering Heights can have completely different views on Heathcliff which represent the idea that he is misunderstood by a lot people. There are different characteristics that critics have labelled Heathcliff, some include a social misfit, a devil from h**l, or something completely different by labelling him a romantic or gothic hero. The different characteristics indicate that there will never be one 'label' for Heathcliff. As Heathcliff is the main character of Emily Bronte's novel, there are some interesting things that revolve around the man from the time he arrives at Wuthering Heights as a complete outsider until he dies as a powerful landlord of both Wuthering Heights and Thrushcross Grange. In the first part of Nelly's narration, she begins by telling how Heathcliff come about the house. 'We crowded round, and, over Miss Cathy's head, I had a peep at a dirty, ragged, black-haired child.' ...read more.

After Mr. Earnshaw's death Heathcliff has a very deep and enduring hatred and an all consuming passion for revenge. Heathcliff will never forget the injury and pain inflicted on him during his poor childhood. When Heathcliff returns from a three year absence, Heathcliff has his revenge planned and wants to revenge everyone that wronged him as a child; this becomes an extremely overpowering passion that leads to him becoming in power of both Wuthering Heights and Thrushcross Grange. He controls the decline of Hindley by encouraging him to drink excessively and to start gambling. 'I'm trying to settle how I shall pay Hindley back. I don't care how long I wait, if I can only do it at last. I hope he will not die before I do!' Heathcliff knows he wants Hindley to endure the pain and misery that he encountered from him; he wants revenge more than anything. Heathcliff also has revenge directed on Edgar as he took away Catherine from him. Although Catherine and Heathcliff were deeply in love, they both knew why they couldn't be together forever. 'It would degrade me to marry Heathcliff...if Heathcliff and I married, we should be beggars?' ...read more.

Nelly describes his actions with 'He dashed his head against the knotted trunk; and, lifting up his eyes, howled, not like a man, but like a savage beast getting goaded to death with knives and spears'. Heathcliff is described as being inhuman, violent and being demon like. In conclusion, Heathcliff has many different types of characters in Wuthering Heights. As a child he characterised as an outsider with his social background, sullenness, and his fierce and passionate attachment to Cathy. When Heathcliff becomes an adult, he is quite a different man. He has a strong hatred for the people that wronged him as a child, villain like driven by revenge, distorted and twisted. The Victorian tale conveys the differences in social class and how that can affect people. Overall, I believe that Heathcliff is more a fiend from h**l as he has a high capacity of hatred for alot of people who wronged him because of his social class. In Wuthering Heights, there are many descriptions of him being demon like, inhuman and monster like. He causes too much pain on people and has an all consuming passion for revenge. Although the reason for Heathcliff to be obsessed with revenge was driven by his social class, if he wasn't from such a poor background, he wouldn't have been treated like he was. ...read more.