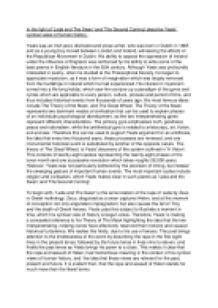 In the light of 'Leda and The Swan' and 'The Second Coming' describe Yeats' cyclical views of human history.

﻿In the light of 'Leda and The Swan' and 'The Second Coming' describe Yeats' cyclical views of human history. Yeats was an irish poet, dramatist and prose writer, who was born in Dublin in 1865 and as a young boy moved between London and Ireland, witnessing the effects of the Republican Movement in Dublin. His ability to oppose the oppression of Ireland under the influence of England, was reinforced by his ability to write some of the best poems in English literature in the 20th century. Although Yeats was profoundly interested in poetry, when he studied at the Theosophical Society, he began to appreciate mysticism, as it was a form of imagination which was largely removed from the hardships in Ireland which he had experienced. His interest in mysticism turned into a life long hobby, which saw him conjure up a paradigm of the gyres and cycles which are applicable to every person, culture, process and period of time, and thus includes historical events from thousands of years ago. His most famous ideas include The Theory of the Mask, and The Great Wheel. The Theory of the Mask represents two dominant modes of civilisation that can be used to explain phases of an individuals psychological development, as the two interpenetrating gyres represent different characteristics. The primary gyre emphasises truth, goodness peace and rationalism, while the antithetical gyre is related to aristocracy, art, fiction, evil and war. ...read more.

However, in the sestet the tone changes, creating ambiguity about the situation, making the audience question whether in fact Leda is falling in love with the power which this God-like figure imposes on her. The audience realise this may be a metaphor for the way in which people will behave towards the change in era; comprehensive and anxious at first, yet strengthened and satisfied later. Yeat cleverly uses the dividing line between the octave and sestet as the moment of ejaculation: 'A shudder in the loins?' This emphasises the idea that the moment of conception, is the moment of change, not only for Helen who will end up "caught up" with Zeus only for him to be "indifferent", but also for humanity, which will see a completely new era arise as a consequence, i.e the hatching of Helens children into Clytemnestra and Helen and the war-gods Castor and Polydeuces which resulted in the Trojan War. Yeat makes a brief reference to this in 'Leda and the Swan': '?The broken wall, the burning roof and tower/And Agamemnon dead' yet the idea which Yeat wants us to register, is the lasting impact which this war had; it brought about the end of the ancient mythological era, and saw the rise of modern history. Furthermore, Yeat uses powerful and evocative language, as a means to help the audience understand the events unfolding, and the notion of his cyclical views. ...read more.

In other words, the worlds primary gyre is falling apart, and like the frantically widening flight-path of the falcon that has lost contact with the falconer; the next age will take its character not from the gyre of science, democracy and peace, but from the contrary - the "rough beast" which slouches towards Bethlehem. This vision of the new world troubles Yeat, who uses repetition as a means of mocking the people who welcome this change: 'Surely some revelation is at hand/The Second Coming!' This is not only used as a form of sarcasm, but also as a warning to reassure the audiences apprehension of a lawless society. A further reference to the Bible is apparent in Yeats' expression of the Sphinx's shape: 'A shape with lion body and head of a man?' that resides in '?a waste of desert sand' Christ himself was tempted by Satan in the desert, and the use of such a desolate environment is pathetic fallacy and supports the idea that human society will collapse, including its "Spiritus Mundi". We realise that Yeat is describing what the next two thousand years will constitute of; an evil and apocalyptic future for all. This is supported by the extended metaphor of birds, which Yeat uses on several occasions. He explains that the birds become "indignant" as they "wind" around the Sphinx. This helps the audience understand that one day we will realise how far we have distanced ourselves from the good of the primary gyre, but by then there are no reversible actions. ...read more.