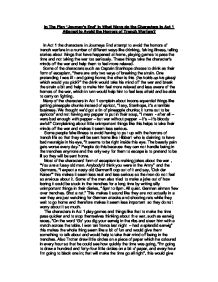 In The Play 'Journey's End' in What Ways do the Characters in Act 1 Attempt to Avoid the Horrors of Trench Warfare?

In The Play 'Journey's End' in What Ways do the Characters in Act 1 Attempt to Avoid the Horrors of Trench Warfare? In Act 1 the characters in Journeys End attempt to avoid the horrors of trench warfare in a number of different ways like drinking, faking illness, telling stories about things that have happened at home, playing games to pass the time and not taking the war too seriously. These things take the character's minds off the war and help them to feel more relaxed. Some of the characters such as Captain Stanhope choose to drink as their form of escapism, "there are only two ways of breaking the strain. One pretending I was ill - and going home; the other is this (he holds up his glass) which would you pick?" the drink would take his mind off the war and break the strain a bit and help to make him feel more relaxed and less aware of the horrors of the war, which in turn would help him to feel less afraid and be able to carry on fighting. ...read more.

rats while they wait to go home and therefore makes it seem less important so they do not worry about it so much. The characters in Act 1 play games and things like that to make the time pass quicker and to stop themselves thinking about the war, such as earwig races, "On the word 'Go' you dig your earwig in the ribs and steer him with a match across the table. I won ten francs last night - had a splendid earwig" this makes the whole thing seem like a bit of fun and would give them something to talk about and would help to take their mind off being in the trenches. Also Trotter drew little circles on a piece of paper which he coloured in every hour so that he could see how quickly the time was going, "I'm going to draw a hundred and forty-four little circles on a bit o' paper, and every hour I'm going to black one in; that will make the time go all right", this would give him something think about instead of the war and would make the time go faster. ...read more.

It helps." Thinking of things like that would make it seem less horrible and could stop him from feeling so bad about the war by associating it with nice things like romance. Lastly, soldiers like Raleigh look up to other soldiers like Stanhope and trust that nothing will happen to them as long as they are around, "I believe Raleigh will go on liking you - and looking up to you - through everything. There's something very deep, and rather fine, about hero worship." Having a familiar face with you in the trenches would make you feel better about being there and would help you to feel less afraid, especially if you feel like they will look after you and keep you safe and it could make the conditions not seem as bad as you have someone to share them with. To conclude many of the soldiers find different ways of escaping the horrors of trench warfare in many different ways from drinking to having earwig races and each of the individual soldiers' forms of escapism helps them to feel less anxious about being so far away from home in the war and helps to take their minds off the danger and horror of being stuck in the trenches. ...read more.