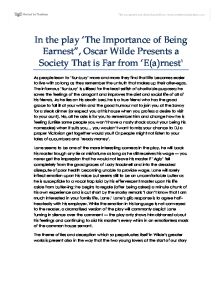 In the play 'The Importance of Being Earnest&quot;, Oscar Wilde Presents a Society That is Far from 'Earnest'

In the play 'The Importance of Being Earnest", Oscar Wilde Presents a Society That is Far from 'E(a)rnest' As people learn to 'Bunbury' more and more they find that life becomes easier to live with so long as they remember the untruth that makes up their alter-egos. The infamous 'Bunbury' is utilised for the least selfish of charitable purposes; he saves the feelings of the arrogant and improves the diet and social life of all of his friends. As he lies on his death bed, he is a true friend who has the good grace to fall ill at your whim and the good humour not to join you at the Savoy for a steak dinner (or expect you at his house when you profess a desire to visit to your aunt). No, all he asks is for you to remember him and change how he is feeling (unlike some people you won't have a nasty shock about your being his namesake) when it suits you... you wouldn't want to miss your chance to DJ a proper Victorian get together would you? Or people might not listen to your tales of cucumbers and 'ready money'. Lane seems to be one of the more interesting cameos in the play, he will back his master trough any lie or misfortune as long as he still receives his wage - you ...read more.

It is true that her narcissism is exploited by many of the play's main characters; Algernon for example simply quells her contempt for his beloved Bunbury by offering her his services meanwhile scratching the back of his good friend Ernest (Jack) and allowing him to further deceive Lady Bracknell. As he does this, Gwendolen remains seated after agreeing to follow her mother - all of this so Jack can 'not talk about the weather' with his beloved. In London society (at the time) E(a)rnest had more meanings than one, pointing to what is often considered an ambiguous relationship between Algernon and Jack. E(a)rnest had not only today's meanings (i.e. truth and a name) but it also was a Victorian slang term referring to homosexuality. Many believe that this is a large reason for Wilde's Choice of title which may be wholly true, however it is my strong belief that the 'ambiguous' relationship between Algernon and Jack that is so often referred to is not at all h********l but is only that of two long-time friends. I think that it is truer that Wilde's neologism 'bunbury' must mean more than 'liar'. I think bunbury is more than likely meant to refer to being h********l in Victorian times. This relates back to Wilde's life in more ways than one, not only was he having to spend every day of his life lying about his sexuality he was also having to think about a court case. ...read more.

The parody of marriage is a common sub-plot for Wilde plays and other works which reveals a hidden theme of his married life as he tried to break away from his wife he was always considering what would happen where the reverse of his situation to happen. This is where the irony of the 'Gold with grief' is most relevant. The parody of life that is portrayed in this sentence is very truthful for Wilde who wants to leave his marital life as soon as possible and feels his face would lose its age if he lost his family. This must of have been terrible for Constance Lloyd who was sat in the audience to hear as it would have been glaringly obvious to her how unhappy Oscar was with their life together. Consequently, while truth is a theme in 'The Importance of Being Earnest' and while Oscar Wilde does describe a society in which there is not much room for it without some sort of feud developing, he also has a view to other factors than lying to protect one's self. The play seems steeped in a thick irony which is oft unrelenting in his works and seems to be irony for the sake of comedy rather than trying to draw any kind of moral conclusion on the subject of being Earnest being anything but a bad thing - nothing has so far gone wrong with either of the two 'brothers'' lies... Count: 1463 words ...read more.