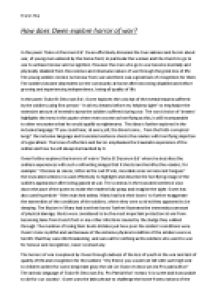 ﻿Sharon Maj How does Owen explore horror of war? In the poem ?Dulce et Decorum Est? Owen effectively discusses the true sadness and horror about war, of young men ushered by the home-front, in particular the women and the church to go to war to achieve honour and recognition. However the men who go to war become mentally and physically disabled from the violence and inhumane nature of war through the great loss of life. The young soldiers receive no honour from war and there was a great lack of recognition for them. The soldiers became dependent on the community at home after becoming disabled and before growing and experiencing independence, losing all quality of life. In the poem 'Dulce Et Decorum Est', Owen explores the concept of the mental trauma suffered by the soldiers using first person ? In all my dreams before my helpless sight? to emphasize the extensive amount of mental trauma the soldiers suffered during war. ...read more.

Owen has also used hyperbole ? Men marched asleep. Many had lost their boots? to further exaggerate the extremities of the conditions of the soldiers, where they were so tired they appeared to be sleeping. The illusion in 'Many had lost their boots' further illustrates the tremendous amount of physical damage. Boots were considered to be the most important protection at war from becoming lame from trench foot or any other infections caused by the sludge they walked through. The mention of losing their boots dictates just how poor the soldier?s conditions were. Owen's tone is pitiful and sad because of the extreme physical condition of the soldiers were so horrific that they were life threatening, and were all for nothing as the soldiers who went to war for honour and recognition, never received any. The horrors of war is explored by Owen through sadness of the loss of youth in the war and lack of quality of life and recognition for the soldiers ? My friend, you would not tell with such high zest to children ardent for ...read more.

The structure is 4 unequal stanzas the stanzas vary in length to give the impression of the soldiers drifting in and out of consciousness, either through fatigue or through the gas attack. The poem?s structure is to see it as being based on two sonnets. The first one, with one stanza of 8 lines and one of 6 follows the stanza form, if not the rhyme structure of the classical Petrarchan sonnet. The second one could be seen as being an inversion of the stanza form of the Shakespearians sonnet( 3 quatrains or 12 lines plus a final couplet). Owen uses rhythm and rhyme ?sacks-backs, sludge-trudge, boots-hoots? to convey the idea of soldiers marching. In conclusion Owen uses a variety of techniques such as simile, alliteration and rhymes to convey the horror of war; also by using good diction, vivid comparisons, and graphic images to have the reader feel disgusted at what war is capable of. This poem is extremely effective as an anti-war poem, making war seem absolutely horrid and futile. ...read more.