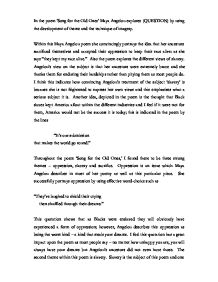 In the poem 'Song for the Old Ones' Maya Angelou explores (QUESTION) by using the development of theme and the technique of imagery.

In the poem 'Song for the Old Ones' Maya Angelou explores (QUESTION) by using the development of theme and the technique of imagery. Within this Maya Angelou poem she convincingly portrays the idea that her ancestors sacrificed themselves and accepted their oppression to keep their race alive: as she says "they kept my race alive." Also the poem explores the different views of slavery. Angelou's view on the subject is that her ancestors were extremely brave and she thanks them for enduring their hardships rather than pitying them as most people do. I think this indicates how convincing Angelou's treatment of the subject 'slavery' is because she is not frightened to express her own views and this emphasises what a serious subject it is. Another idea, depicted in the poem is the thought that Black slaves kept America afloat within the different industries and I feel if it were not for them, America would not be the success it is today; this is indicated in the poem by the lines "It's our submission that makes the world go round." ...read more.

This particular quotation describes how the Black slaves were linked together while working and moving. The third theme is sacrifice. Within the poem Angelou speaks of her point of view on her ancestor's slavery. The quotation "that shred my fact and sound," is the line Angelou uses to express her views. She feels that people who are sympathetic towards the slaves' lives are only touching the surface of the reasons why her ancestors sacrificed themselves. Angelou believes she should thank them, not sympathise with her ancestors because she understands why they sacrificed themselves, "they kept my race alive." Maya Angelou uses imagery throughout the poem 'Song for the Old Ones' to heighten the impressions the reader is given of slavery and oppression while reading the poem. The following metaphor, I feel gives the impression of long-lasting effects of slavery, even after it has ended "the slats leave dents of darkness." This is an appropriate quotation that proves what I felt previously because as you become older, dents pressed into your skin while sitting on a bench ...read more.

Thirdly, throughout the times when Blacks were and still are being oppressed, their means of conveying pain was to write songs - called the blues. Usually this type of music is relaxed and that is why the following quotation is so hard-hitting - "to write the blues with screams." The use of the word "screams" shows exactly how much suffering Blacks have faced and because they had been quiet for so long the pain had built-up and then developed into screams. In conclusion, within this analysis of 'Song for the Old Ones,' I have explored (QUESTION) through Maya Angelou's eyes. Angelou treats the subject of her ancestor's slavery with great pride and she writes from her heart with her true thoughts and feelings coming through in the poem. This is why I find the treatment of this subject so convincing. Throughout this essay I have referred to the poem to describe the themes and use of imagery Angelou uses to create this feeling of oppression and times of endurance. I feel Angelou has successfully explored (QUESTION) within this poem by referring to past oppression which Blacks had encountered. ...read more.