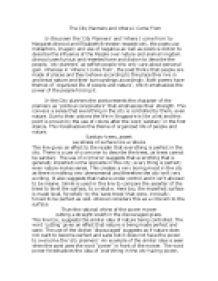 In the poem the City Planners and Where I come from by Margaret Atwood and Elizabeth Brewster respectively, the poets use metaphors, imagery and use of negative as well as positive diction

﻿The City Planners and Where I Come From In the poem the ?City Planners? and ?Where I come from? by Margaret Atwood and Elizabeth Brewster respectively, the poets use metaphors, imagery and use of negative as well as positive diction to describe the influence of the People over nature and animal kingdom. Atwood uses furious and resented tone and diction to describe the people, ?city planners? as selfish people who only care about personal gain. Whereas in ?Where I come from?, the poet thinks that people are made of places and they behave according to the place they live in and treat nature and their surroundings accordingly. Both poems have themes of ?organized life of people and nature?, which emphasizes the power of the people forcing it. In the City planners the poet presents the character of the planners as ?political conspirators? that emphasizes their strength. This conveys a sense that everything in the city is controlled by them, even nature. ...read more.

An example of the similar idea is seen when the poet uses the word ?power? in front of the mower. The word power foreshadows the idea of ?everything in the city having power, except for nature?. The same slant of avoidance to the hot sky. The people also ignore disorganized nature that the city planners cannot change. This can be seen clearly when, ?the same slant of avoidance to the hot sky? is mentioned. In this line the houses avoiding the sun are a metaphor for the people. The poet uses a deeper layer to the meaning by using the houses as a metaphor. The metaphor suggests that the people in Singapore are ?planned? to avoid imperfectness. They are planned to avoid insane and irregular nature just like the life of animals and people are planned and organized. When the houses, capsized, will slide obliquely into the clay seas, gradual as glaciers that right now nobody notices. ...read more.

She states that in the countryside the people are very different from those in the city. Here, nature is not considered to be subservient that can be clearly seen when the poet conveys how nature is not controlled, ?blueberry batches in burnt out bush?, ?with yards where hens and chickens circle about, clucking aimlessly; battered schoolhouses behind which violets grow.? . The word ?burnt? is effective because is conveys a sense of not being controlled. This suggests that people in the countryside do not replace nature; they simply give them time for growing once again. The line, ?Battered school houses behind which violets grow? also emphasizes the freedom of nature in the countryside. The use of imagery, ?violets?, growing behind the ?battered? schoolhouses suggests that nature can grow anywhere beautifully and its real beauty is shown when it is allowed to grow randomly. The poets of both the poems think that nature is being controlled by modern society. Atwood blames the city planners as the reason behind this whereas Brewster believes that common people in the city are also blamed for controlling nature and thinks that people behave differently according to the place they live in. ...read more.