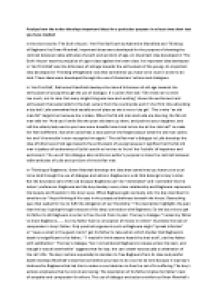 In the short stories The Dolls House, Her First Ball both by Katherine Mansfield and Thinking of Bagheera by Owen Marshall, important ideas were developed for the purpose of showing the contrast between nave attitudes of youth and cynicism of age

ï»¿Analyse how the writer develops important ideas for a particular purpose in at least two short text you have studied In the short stories ‘The Doll’s House’, ‘Her First Ball’ both by Katherine Mansfield and ‘Thinking of Bagheera’ by Owen Marshall, important ideas were developed for the purpose of showing the contrast between naïve attitudes of youth and cynicism of age. An important idea developed in ‘The Doll’s House’ was the prejudice of upper class against the lower class. An important idea developed in ‘Her First Ball’ was the bitterness of old age towards the enthusiasm of the young. An important idea developed in ‘Thinking of Bagheera’ was that sometimes you have to be cruel in order to be kind. These ideas were developed through the use of characters’ actions and dialogues. In ‘Her First Ball’, Katherine Mansfield develops the idea of bitterness of old age towards the enthusiasm of young through the use of dialogue. It is Leila’s first ball. “She tried not to smile too much, not to care. But every single thing was new and exciting” shows the excitement and enthusiasm that Leila holds for the ball. Leila is from the countryside and it’s her first time attending a city ball. ...read more.

The boy’s dialogue “I asked my father to shoot Bagheera…….. but my father had no conception of misery in others” illustrates the lack of compassion in boy’s father. Only practical arguments such as Bagheera might “spread infection” or “cause a smell in the guest rooms” get his father to take action which implies that Bagheera’s death is insignificant to his father, “ ‘I wouldn’t think anyone heard the shot at all’, said my father with satisfaction.” The boy’s dialogue “but I remembered Bagheera’s release across the lawn, and though it was all worthwhile” suggests that for boy, the cat’s death was actually a celebration of the cat’s life. The boy’s actions especially his decision to free Bagheera from its slow and painful death develops Marshall’s idea that sometimes you have to be cruel to be kind because it was boy’s kindness for Bagheera that led him to make a cruel decision to free the cat of its suffering. The boy’s actions emphasise that he is kind and caring. The description of his father implies his father’s lack of empathy and compassion for others. The use of dialogue and actions reinforces Owen Marshall’s purpose to show the contrast between the naïve attitudes of the boy and cynicism of his father. ...read more.

In both the short stories, Mansfield and Marshall develop the themes for the particular purpose of showing the contrast the naïve attitudes of youth and cynicism of old age. In ‘The Doll’s House’ and ‘Thinking of Bagheera’ the elders, Aunt Beryl and the boy’s dad lack emotions. Boy’s dad has lack of compassion for the suffering cat and lack of understanding of the boy’s decision to kill the cat. Similarly, Aunt Beryl imposes prejudice and judges others on the basis of their social status. But it was the boy and Kezia’s naïve attitude that makes them more ‘mature’ than adults. Kezia accepts others as individuals not on the basis of prejudice. Likewise, the boy makes a very mature decision of getting his father to kill Bagheera to free Bagheera of its suffering. In both short stories, the adults were portrayed as emotionless while the young had empathy and consideration for others. Authors’ particular purpose influenced me to change my opinion because the authors showed me that it doesn’t require ‘adults’ maturity’ but the youth’s naivety to make right decisions. Although the short stories “Her First Ball’, ‘The Doll’s House’ and ‘Thinking of Bagheera’ deal with different ideas, those ideas were developed to emphasise the same purpose. Katherine Mansfield and Owen Marshall effectively used protagonists’ actions and dialogues to show the contrast between naïve attitudes of youth and cynicism of age. ...read more.