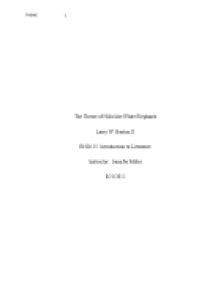 ﻿THEME The Theme of Hills like White Elephants Larry W. Benton II ENG125: Introduction to Literature Instructor: Jennifer Miller 8/21/2012 ________________ THEME In the short story Hills like White Elephants by Ernest Hemingway there are many different ways to describe the theme of this short story but in the most basic sense I would say it is the classic cross roads symbol that is to say that it has a person that has many different ways that they could go. For instance in this story that couple ?The American and the girl? were sitting at a train station waiting on the train to what I assumed was some sort of operation in another city. ...read more.

Like how he refers to the waitress that gave them their drinks as a woman but the woman that has come with the American as a girl says that she may be young and perhaps a bit immature. This is not the only way he does this he also uses other small hints like how she does not know what ?Anis del Toro? tastes like or how to drink it this along with the way she refers to it tasting like a candy THEME [licorice] is to say that she may be inexperienced to the adult world. ...read more.

Also the way the girl refers to everything that people wait for tastes like licorice that is to say that it is bitter sweet. You wait and wait so long for something that when you finally get it, it does not madder how good it tastes you will never get the time you spent waiting back (Weeks Jr, 2002). The whole stories point of view is in the third person for the most part the narrator refers to everyone as he, she, the waitress, the girl, and the American. While it may be in second person point of view in some scents like how the girl talks to herself and others (Journey in to Literature 7.3). ...read more.