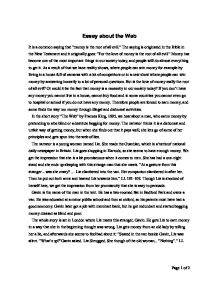 In the short story The Web by Frances King, 1995, we hear about a man, who earns money by pretending to a be blind or a destitute begging for money. The narrator thinks it is a dishonest and unfair way of getting money

Essay about the Web It is a common saying that "money is the root of all evil." The saying is originated in the Bible in the New Testament and it originally goes: "For the love of money is the root of all evil." Money has become one of the most important things in our society today, and people will do almost everything to get it. As a result of that we have reality shows, where people can win money for example by living in a house full of cameras with a lot of competitors or in a new show where people can win money by answering honestly to a lot of personal questions. But is the love of money really the root of all evil? Or could it be the fact that money is a necessity in our society today? If you don't have any money you cannot live in a house, cannot buy food and in some countries you cannot even go to hospital or school if you do not have any money. ...read more.

Then he put out both arms and heaved Liz towards him." LL 101-103. Though Liz is shocked of herself here, we get the impression from her promiscuity that she is easy to persuade. Gavin is the name of the man in the text. He has a two-roomed flat in Bedford Park and owns a van. He was educated at a minor public school and then at oxford, so his parents must have had a good economy. Gavin later got a job with merchant bank, but he got redundant and started begging money dressed as blind and poor. The whole story is set in London where Liz meets this stranger, Gavin. He gets Liz to earn money in a way that she in the beginning thought was wrong. Liz gets money from an old lady by telling her a lie, and afterwards she seems to feel bad about it: "Seated in the van beside Gavin, Liz was silent. "What's up?"Gavin asked. Liz Shrugged. She though of the old woman... ...read more.

Acting on those impulses of l**t for material things is like worshipping the devil. What we can learn from this is that though the material things seem valuable the moral is worth more. It is however impossible to deny that money has a high value today. The problem is just, if you let yourself be controlled by the desire to get more of it. There is a picture by Jemmy Holzer, which is called "Protect me from what I want ". It shows a sign that says the title. This picture indicates that the l**t of something might be dangerous. From this going through of the three elements above we can conclude that the love of money defiantly not leads to good deeds. Whether it leads to evil deeds can be discussed, but the fact that money are necessary and powerful in today's society, makes it impossible to eliminate the love and greediness for money. Instead we should focus on getting the money a fair way and on being happy with what we have. Ord: 905 Page 1 of 2 ...read more.

The writer knows and understands the short story but lapses in expression obscure meaning throughout the essay. Writer conveys own opinion through quoting of the Bible and mentioning a painting when it might have been better to explore the short story more. For instance there is no mention how the story ends and if Gavin and Liz change what they are doing.