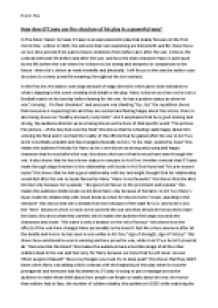 In The Silver Tassie. How does OCasey use the structure of his play in a powerful way?

﻿Sharon Maj How does O?Casey use the structure of his play in a powerful way? In The Silver Tassie" by Sean O'Casey is an expressionistic play that mainly focuses on the First World War, written in 1928, the extracts that I am examining are Extracts B1 and B2, these focus on two time periods from past to future renditions from before and after the war, it shows the contrast between life before and after the war, and how the main character Harry is portrayed by the life before the war where he is shown to be strong and attractive in comparison to the future where he?s shown as weak mentally and physically, I will focus on the way the author uses structure to convey powerful meanings throughout the two extracts. In the first Act, the author uses large amount of stage direction which gives wide indication to what is happing in the scene creating vivid detail to the play. ...read more.

When surgeon Maxwell? Now,now,Heegan-you must try to keep quiet? this shows that they didn?t listen when Harry was talking which contrast with the beginning of the play when he was the protagonist and everyone had his attention; O?Casey is trying to put a massage across the audience to make them think about how people can forget so easily about the war, the horror that soldiers had to face, the number of soldiers deaths; the audience in 1929 while watching the play must have felt more emotionally involved as they remember how horrible and futile the war was, and the fact that people after the war ended just continued the everyday normal life without remembering the heroes. Overall O? Casey uses a variety of techniques through structure like stage direction, and change time of periods to have a powerful effect on the audience and to make them think and emotionally involved. ...read more.