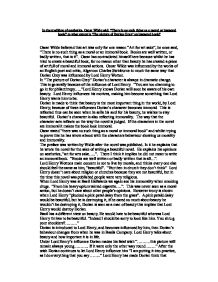 In the tradition of aesthetics, Oscar Wilde said, "There is no such thing as a moral or immoral book" to what extent is 'The picture of Dorian Gray' an immoral book? Oscar Wilde believed that art was only for one reason "Art for art sake", he once said, "There is no such thing as a moral or an immoral book. Books are well written, or badly written, that is it". Oscar has contradicted himself here because whilst he has tried to create a beautiful book, for no reason other than beauty he has created a piece of art full of moral and immoral actions. Oscar Wilde was influenced by the works of an English poet and critic, Algernon Charles Swinburne in much the same way that Dorian Grey was influenced by Lord Henry Wotton. In "The picture of Dorian Grey" Dorian's character is always in dramatic change. This is generally because of the influence of Lord Henry. "You are too charming to go in for philanthropy....."Lord Henry knows Dorian will soon be aware of his own beauty. Lord Henry influences his motives, making him become something that Lord Henry wants him to be. Dorian is made to think that beauty is the most important thing in the world, by Lord Henry; because of these influences Dorian's character becomes immoral. ...read more.

This may have been dishonesty on Lord Henry's part and this is an immoral action. Henry's status and reputation is more important is more important than Dorian's love. Dorian then decides to dedicate his life to the painting as there would be "A real pleasure in watching it". This may have been one of the many quotes that outraged many people to accuse Oscar Wilde had written. "Someone has killed herself for love of you. I wish that I had ever had such an experience." He wishes that someone would kill themselves for his love. This was considered an immoral request, however this was Lord Henry's character. He is very carefree and does like things that are ugly and he influences Dorian into thinking this too. We are shown a respectable moral point of view by Basil, he looks at the tragedy of Sibyl's death and offers great sympathy, however being influenced by Lord Henry's carefree attitude Dorian reflects this on Basil. "My dear Basil how do I know?.....I was at the opera....." Henry has persuaded Dorian to go to the opera even though the woman Dorian loves has committed suicide. Dorian tries to forget about Sibyl. Henry has told him that if you don't talk about something it never happened. "If one doesn't talk about a thing, it has never happened, it is simply expression, as Harry says." ...read more.

"I hope Dorian has told you about my plan for rechristening everything..." Lord Henry had the power to do this, he has gained respect. Dorian meets his second love in the novel however he doesn't corrupt Hetty Merton, he decides that he has not been kind enough and tries to change. "I have done to many dreadful things in my life..." he is trying to be good and change the painting and to clear his conscience. However Dorian will not take responsibility for the deaths that he either committed or drove them to. Dorian realises that if he destroys the painting he will destroy his soul. "it had been like a conscience to him... he would destroy it ...." However he doesn't realise that he will kill himself. He stabs the portrait to get rid of all his immoral actions. In conclusion the essay. I think this book is not immoral, a lot of the characters are immoral especially Lord Henry. But different people have different views on what's moral or immoral. Oscar Wilde has written a book that shows what happens if you live your life in certain ways like taking drugs but it is not teaching us to do these things, he merrily wrote a book for the sake of writing a book. Steve Hounsell Henry gave Dorian a book; this is also affecting the picture as Dorian is living through the book. Dorian does not live his own life and he is dissatisfied with his new life. ...read more.