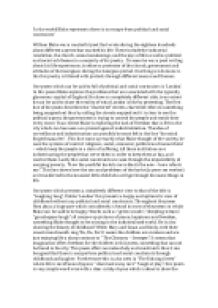 In the world Blake represents there is no escape from political and social constraints. Examples from London The School Boy The Chimney Sweeper

Ã¯Â»Â¿â€˜In the world Blake represents there is no escape from political and social constraintsâ€™ William Blake was a masterful poet that wrote during the eighteen hundreds about different aspects that marked his life. These include the industrial revolution, the church, sexual awakenings, and the joys of life as well as political and social sub themes in a majority of his poetry . To some he was a poet writing about his life experiences, to others a protestor of the church, government and attitudes of the Georgians during the Georgian period. One thing we do know is that his poetry is littered with protests through different means and themes. One poem which can be said to full of political and social constraints is â€˜Londonâ€™. In this poem Blake explores the problems that are associated with the typically glamorous capital of England. He shows a completely different side, to an extent he can be said to show the reality of what London is like by protesting. The first line of the poem describes the â€œcharteredâ€ streets, chartered refers to something being mapped out thus by calling the streets mapped out it is clear to see the political aspect, the government is trying to control the people and watch their every move. ...read more.

It seems that imagination offers freedom for the children in this poem, something that cannot be found in the city. This poem offers no melancholy and constraints thus it can be agued that there is escape form political and social constraints through childhood and laugher. Furthermore this is also seen in â€œThe Echoing Greenâ€ where life is carefree and joyous â€œ does look away careâ€ â€œlaugh at playâ€, this poem is very simple word wise with a clear catchy rhyme which is done to show the simplicity of the echoing green, but in a positive sense. It seems that nature is the escape from political and social constraints in Blakeâ€™s world. However political and social constraints occur once again in â€œThe Schoolboyâ€. Hardy was a strong advocate against schools and asked his parent to withdraw him from an early age thus becoming self-educated. This was because he did not feel that the system stimulated him enough and thus this poem describes his thoughts. He saw children as â€œdivine innocenceâ€ and to keep them locked in a classroom was a crime. ...read more.

This is ironic because in the Bible Jesus said that â€œWhoever is generous to the poor lends to the Lord, and he will repay him for his deed.â€ and it seems that these church goers who supposedly believe in God are ignoring the very thing God said, thus Blake is criticizing the social constraints that the Church and the government put on the poor. It would be right to say that in this poem there is no escape from political and social constrains. In conclusion it would seem that the question posed does not carry full truth but can be argued from both sides. In most of his poems there is no escape from these constraints, poems such as â€˜Londonâ€™ â€˜The School Boyâ€™ â€˜ The Chimney Sweeperâ€™ present a bleak reality of the impossibility of escaping from the political and social constraints that society impose upon its people. However Blake uses he idea of nature, his preferred side to show that there can be freedom. In a way the city and towns are the things that form the constraints however when one enters nature and lets their imagination run wild there is a long needed escape that Blake is more than happy to present. ...read more.