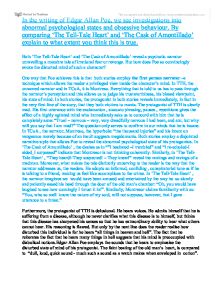 In the writing of Edgar Allan Poe, we see investigations into abnormal psychological states and obsessive behaviour. By comparing The Tell-Tale Heart and The Cask of Amontillado explain to what extent you think this is true.

In the writing of Edgar Allan Poe, we see investigations into abnormal psychological states and obsessive behaviour. By comparing 'The Tell-Tale Heart' and 'The Cask of Amontillado' explain to what extent you think this is true. Both 'The Tell-Tale Heart' and 'The Cask of Amontillado' reveal a psychotic narrator unravelling a macabre tale of irrational fear or revenge. But how does Poe so convincingly evoke the distorted mind of such a character? One way that Poe achieves this is that both stories employ the first person narrator -a technique which allows the reader a privileged view inside the character's mind. In TTH, the unnamed narrator and in TCoA, it is Montreso. Everything that is told to us has to pass through the narrator's perception and this allows us to judge his trustworthiness, his biased viewpoint, his state of mind. In both stories, the protagonist in both stories reveals immediately, in fact in the very first line of the story, that they both victims to mania. The protagonist of TTH is clearly mad. His first utterance with the exclamation , staccato phrasing, pauses , repetitions gives the effect of a highly agitated mind who immediately asks us to concord with him that he is completely sane: "True! - nervous - very, very dreadfully nervous I had been, and am; but why will you say that I am mad?" ...read more.

suspicion: "for the half of a century no mortal has disturbed them".These are no spontaneous crimes of passion but meticulously planned and gruesome murders. As opposed to the raving ramblings of a maniac , we hear the pride of the narrator in the planning and execution of the murder. "You should have seen how wisely I proceeded - with what caution - with what foresight -with what dissimulation I went to work".The horror which the reader experiences stems from the way that the narrator can so casually and unemotionally portray these horrific killings.What is interesting in TTH is how the narrator can distance himself from the actual deed. The narrator in TTH claims that it is not the old man that he wishes to kill ; instead, he merely wishes to close forever the Evil eye: ""For it was not the old man who vexed me, but his Evil Eye." Such disassociation from the evil deed that he intends to perpetrate on this innocent old man shows his lack of any emotional involvement with the deed: he does not see that closing the eye forever inevitably involves causing harm to the old man. He rationalises to himself that he is merely ridding himself of the eye and the old man is incidental to this. All these symptoms experienced by the protagonist-the emotional instability, the delusions, the detachment from reality all point to schizophrenia. ...read more.

This serves to physically isolate him from the multicoloured throng around him; it also represents his role as executioner of Montresor. Also, in the gothic tradition, Poe shows these protagonists' instinctive needs and desires are fulfilled at a cost: guilt. The protagonist of 'The Tell-Tale Heart' feels compelled to confess his murderous deed; Montresor , fifty years later, feels impelled to confide what happened. Through all these strategies Poe allows the reader a startling revelation into the minds of a psychotic. So powerful and convincing are the portrayals of these states of mind, one cannot help but wonder how he had such an intuitive grasp of this subject. The answer lies in his own life. He himself was subject to delusions and depression, probably brought about by bouts of alcoholism.He would disappear for days on end, taking laudanum, drink but then return to resume his writing with passion. It might be that his experiences during these days provided with the material to delve deeply into the human psyche. In conclusion, both in his own life and in his literature, Poe had a predisposition and fascination with abnormal psychological states. In these two stories, his decision to portray his protagonists as criminals allowed them to revel to the extremes of such behaviour and pushed them even beyond this so that both emerge with a sense of guilt and inability to deal with their psychosis. Therefore, the reader is presented with a thorough and thought-provoking exploration of the minds of abnormal psychological states ...read more.