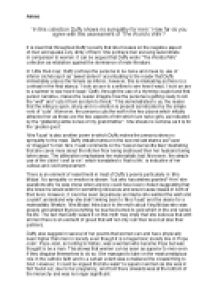 In this collection Duffy shows no sympathy for men. How far do you agree with this assessment of The Worlds Wife?

ï»¿Aimee “In this collection Duffy shows no sympathy for men.” How far do you agree with this assessment of ‘The World’s Wife’? It is clear that throughout Duffy’s poetry that she focuses on the negative aspect of men and speaks very dimly of them. She portrays men as being subordinate in comparison to women. It can be argued that Duffy wrote “The Worlds Wife” collection as retaliation against the dominance of male literature. In 'Little Red-Cap', Duffy portrays the persona to be naive and meek by use of inferior clichés such as “sweet sixteen” accentuating to the reader that Duffy immediately places the female as inferior, however, this is misleading as there is a contrast in the final stanza; 'I took an axe to a willow to see how it wept, I took an axe to a salmon to see how it leapt.' ...read more.

Mrs. Faust comments on the “tuscan terracotta tiles” illustrating that she cares more about the kitchen floor being destroyed then her husband being taken away. The alliteration emphasises her materialistic trait. Moreover, the simple use of the cliché “ces't la vie”, which translates to 'that is life', is indicative of her callous and cold temperament. There is an element of resentment in most of Duffy’s poems particularly in ‘Mrs Midas’. No sympathy or emotion is shown; “but who has wishes granted? Him” she questions why he was chose when anyone could have been chosen suggesting that she knew he would wish for something ridiculous and would cause issues in both of their lives. However, it could be seen as jealousy as maybe she wanted the wish and couldn’t understand why she didn’t linking back to ‘Mrs Faust’ and the desire for a materialistic lifestyle. ...read more.

She managed to take on the most prestigious role in the catholic faith and to a certain extent was considered the closest thing to God. However, it could be argued that she wasn?t a superior woman as she was in fact found out, due to her pregnancy, and from there onwards was at the bottom of the hierarchy and was no longer significant. In conclusion, ?Mrs Faust? is a good example of this a*s throughout the personas husband was constantly being criticised for anything and everything that he does. ?Little Red-Cap? even though she started off innocent, it was soon clear that she wasn?t and that men ? the wolf ? didn?t have any superiority over women even based on their age. The resentment in ?Mrs Midas? also shows a distinct disliking towards male figure particularly because of their greed and selfishness. Therefore, it is very evident that Duffy presents no sympathy towards men in the vast majority of her poems. ...read more.