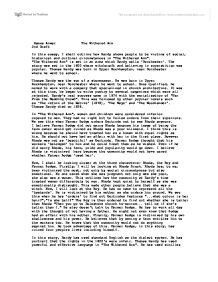 In this essay, I shall outline how Hardy shows people to be victims of social, historical and cultural circumstances in &quot;The Withered Arm&quot;.

I believe Rhoda is victimized here because the community would not have cared whether Farmer Lodge 'used her'. Now, I shall be looking closer at the three characters: Rhoda, the Boy and Farmer Lodge. Firstly, I will be looking at Rhoda Brook. Rhoda has, to me, been victimized the most, not only by social circumstances but also emmotional. No one cared when she was pregnant not only was she poor, she also was a woman. This outlines how the community at Hardy's time treated women differentely to men. Rhoda kept quiet to herself as she was emmotionally distraught. This made other people believe that she was a witch. Now, I will look at the Boy. He has no name to represent all the 'bastards'. He is victimized by his mother as she orders him around. ...read more.

Thomas Hardy has used powerful and effective language in "The Withered Arm". He has used similies in order to help me grasp the nature of the story "there in a the thatch above a rafter showed like a bone protruding about the poverty". Hardy has used alliterations to help create images in the readers mind, and also the way that Hardy writes the dialect, brings out a sense of 'Wessex'. This also aids in creating an image on the culture of which the people lead their lives. In conclusion, Farmer Lodge, Rhoda and the Boy are victims of social, historical and cultural circumstances. Even today, people are victimized because of racism, prejudice and their beliefs. At the end of the story, Lodge has not got the courage to face Rhoda face to face but he tells another man that she is the owner of the farm. And after this "she appeared in her old parish" and "her monotonous milking at the dairy was resumed". By Hamza Anwar ...read more.