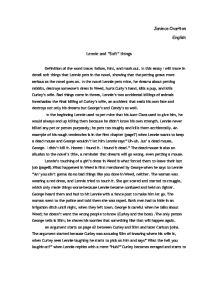 In this essay I will trace in detail soft things that Lennie pets in the novel, showing that the petting grows more serious as the novel goes on.

Janiece Charlton English Lennie and "Soft" things Definition of the word trace: follow, hint, and mark out. In this essay I will trace in detail soft things that Lennie pets in the novel, showing that the petting grows more serious as the novel goes on. In the novel Lennie pets mice, he dreams about petting rabbits, destroys someone's dress in Weed, hurts Curly's hand, kills a pup, and kills Curley's wife. Bad things come in threes, Lennie's two accidental killings of animals foreshadow the final killing of Curley's wife, an accident that seals his own fate and destroys not only his dreams but George's and Candy's as well. In the beginning Lennie used to pet mice that his Aunt Clara used to give him, he would always end up killing them because he didn't know his own strength. Lennie never killed any pet or person purposely; he pets too roughly and kills them accidentally. An example of his rough tendencies is in the first chapter (page7) when Lennie wants to keep a dead mouse and George wouldn't let him Lennie says" Uh-uh. Jus' a dead mouse, George. I didn't kill it. Honest I found it. ...read more.

George slapped Lennie again and again and still he held on to the closed fist, Curley was now white, shrunken, crying and becoming weak. By the time Lennie had let go Curley's hand needed serious attention by a physician (page64) Slim says "We got to get him in to a doctor." "Looks to me like ever' bone in his han' is bust." Lennie is hopeful that because a puppy is bigger than a mouse, it will be strong enough to survive his petting. Lennie is given a pup by Slim and being true to his nature he kills it. Lennie was alone in the barn talking to his puppy, which is dead (page84). Lennie still strokes it, saying, "Why do you got to get killed? You ain't so little as mice. I didn't bounce you hard". He fears he has done a bad thing and that he won't get to tend the rabbits. He scoops a little hollow and lays the puppy in it and covers it over with hay, he continues to stare at the mound he made and says "This ain't no bad thing like I got to go hide in the brush.Oh! no. ...read more.

Realizing that he has "done a real bad thing" (page100), Lennie scoops some hay onto her dead body and steps out of the barn with the dead puppy in his coat. Candy goes into the barn looking for Lennie, and finds Curley's dead wife. Shocked, he runs to get George, who is equally angry. Candy asks who did it, but George knows: "I should of knew," he says, "I guess maybe way back in my head I did" (page 92). Both men realize that Curley will want Lennie lynched and that their dream of a place of their own has been shattered by Lennie's actions. George says sadly: "I think I knowed we'd never do her. He usta like to hear about it so much I got to thinking maybe we would" (page 93). Lennie was constantly in search of a larger pet. Mice died too easily, so did puppies, even humans weren't big enough to handle his 'petting'. When Curley's wife invited Lennie to touch her hair a careful reader could immediately recognize the danger of this invitation. The soft, dead mouse, the soft, dead puppy and now the soft, dead person. This proves that as the novel goes on his petting obsessions worsens. ...read more.

This is a good essay which uses well selected quotes to support statements and remains focused on the question. At times the essay falls into the trap of merely describing what happens in the novel: while this shows a knowledge of the novel it also needs more analysis and discussion rather than mere description of the novel's plot.