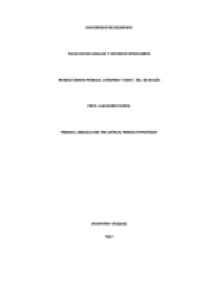 In this paper I am going to talk about pidgins and creoles from the point of view of language acquisition.

ï»¿UNIVERSIDAD DE BELGRANO FACULTAD DE LENGUAS Y ESTUDIOS EXTRANJEROS TRADUCTORADO PÚBLICO, LITERARIO Y CIENT. TEC. DE INGLÉS PROF. ALEJANDRO PARINI “PIDGINS, CREOLES AND THE CRITICAL PERIOD HYPOTHESIS” SAMANTHA VÁSQUEZ 7517 ________________ INTRODUCTION In this paper I am going to talk about pidgins and creoles from the point of view of language acquisition. Creolistics (short form for pidgin and creole linguistics) have provided some revealing and controversial insights into language evolution, acquisition and use; though disagreements exist over what languages or varieties can be labelled as 'creole' or as 'pidgin', and debate continues over the nature of creolization, the 'life cycle' of pidgins and creoles and the origin of grammatical structures in creoles which are absent in any preceding pidgin. PIDGIN LANGUAGES A pidgin language is a language which is based on another language or to be precise on several other languages. A pidgin language develops among people and becomes a means of communication among people who speak different native languages, but in contrast to normal natural languages a pidgin language shows a very poor grammar and a sharply curtailed vocabulary. The major ingredients of a pidgin language come from the native languages of the pidgin speakers. The language with the strongest influence on the pidgin is called the superstrate language and all other contributing languages are called the substrate languages. The vocabulary is mainly drawn from the superstrate language whereas the grammar is a compound product of all involved languages. ...read more.

If language input does not occur until after this time, the individual will never achieve a full command of language, especially grammatical systems. The evidence for such a period is limited and support stems largely from theoretical arguments and analogies to other critical periods in biology such as visual development, but nonetheless is widely accepted. The nature of this phenomenon, however, has been one of the most fiercely debated issues in psycholinguistics and cognitive science in general for decades. Some writers have suggested a 'sensitive' or 'optimal' period rather than a critical one; others dispute the causes (physical maturation, cognitive factors). The duration of the period also varies greatly in different accounts. Steven Pinker, in his book The Language Instinct, states that ?acquisition of a normal language is guaranteed for children up to the age of six, is steadily compromised from then until shortly after puberty and is rare thereafter? (Pinker 1994, p. 298). PIDGINS, CREOLES AND THE CRITICAL PERIOD HYPOTHESIS The form and structure of pidgin languages are very simple. Upon further analysis one can discover that their grammar und usage greatly resembles the language used by Genie1 and that the errors committed by late language learners also seem to be a feature of pidgin languages. Pidgin languages are generally learned by adults therefore. It is no big surprise that the adults who 'invent' the pidgin invent it by incorporating the errors that late first and second language learners usually make. ...read more.

CONCLUSION I think that these findings pretty much explain the structure of Pidgin languages. Also the process of creolization is well explained by this. Children are still in their critical period and therefore able to capture complex structures. It seems like this can happen very quickly without any effort on the side of children, suggesting that this is a natural process. ________________ NOTES 1 Genie is the pseudonym for a feral child who spent nearly all of the first thirteen years of her life locked inside a bedroom strapped to a potty chair. She was a victim of one of the most severe cases of social isolation in American history. Genie was discovered by Los Angeles authorities on November 4, 1970. 2 Salikoko Mufwene is a linguist born in Mbaya-Lareme in the Democratic Republic of the Congo. He is the Frank J. McLoraine Distinguished Service Professor of linguistics at the University of Chicago. He has worked extensively on the development of creole languages, as well as on African American Vernacular English. 3 Noam Chomsky is an American linguist, philosopher, cognitive scientist, political activist, author, and lecturer. He is an Institute Professor and professor emeritus of linguistics at the Massachusetts Institute of Technology. Chomsky is well known in the academic and scientific community as one of the fathers of modern linguistics. 4 Elissa L. Newport is George Eastman Professor of Brain & Cognitive Sciences and Linguistics at the University of Rochester. She specializes in language acquisition and developmental psycholinguistics, focusing on the relationship between language development and language structure. ...read more.