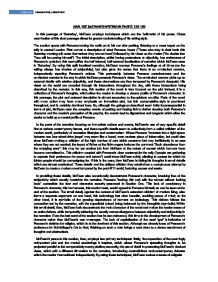 In this passage of Saturday, McEwan employs techniques which are the hallmarks of his prose. Closer examination of this short passage allows for greater understanding of his writing style.

ANALYSE MCEWAN'S WRITING IN PAGES 125-128 In this passage of 'Saturday', McEwan employs techniques which are the hallmarks of his prose. Closer examination of this short passage allows for greater understanding of his writing style. The section opens with Perowne turning the radio on in his car after parking, listening to a news report on the rally in central London. First comes a description of what Perowne hears ("Those who stay in their beds this Saturday morning will curse themselves they are not here") followed by his views on the matter ("He doubts that Theo will be cursing himself"). The initial description, whilst having pretensions at objectivity, has undertones of Perowne's cynicism; this exemplifies the half-internal, half-external focalisation of narrative which McEwan uses in 'Saturday'. By using this split focalised narrative, McEwan conveys Perowne's feelings at all times (as the writing always has shades of subjectivity), but also gives the sense that there is an omniscient narrator, independently reporting Perowne's actions. ...read more.

In the parts of the narration focusing on immediate actions and events, McEwan's use of very specific detail hint at various contemporary issues, and these specific details seem to collectively form a veiled criticism of the modern world, particularly of excessive lifestyles and consumerism. Where Perowne "reverses into a tight space between two four-wheel-drive jeeps" may seem like a banal, even useless piece of information, but could also show McEwan making a criticism of the high number of cars which consume fuel very inefficiently in an area where they are not needed; the layout of fishes at the fishmongers induces the comment "Such abundance from the emptying seas": this may be yet another jab from McEwan at the nature of excess which humans have become normalised to. This criticism coupled with Perowne's clear contempt for the rally ("people are gathering to express their preference for peace and torture") could show McEwan subtly alluding to causes for which he thinks people should be campaigning for. ...read more.

Within this small detail, then, McEwan both deconstructs the main character of the novel and makes the reader aware of an entire debate, while temporarily widening the usually narrow divergence between objectivity and subjectivity in the narration. Even the last word of the section has its own relevance, this time to the development of Perowne's character rather than McEwan's own messages. The lack of capitalisation of the word 'god' is indicative of Perowne's derision for religion, which is at the forefront of this section. Although we already know of Perowne's preference for Schr�dinger's Cat to God, finishing on such a note brings a neat close to a dense assortment of thoughts and abstractions. McEwan's prose in this section, then, employs two primary techniques: firstly, the separation of the seemingly unimportant plot and the mental wanderings it inspires, which allows Perowne's sprawling thoughts to be projected parallel to the comparatively scanty plotline; secondly, the use of detail in presenting McEwan's cloaked views, which add a different dimension to the narrative, introducing contradictions and contemporary debates which the reader must address independently. By using these techniques, McEwan evokes a sense of zeitgeist. ?? ?? ?? ?? ...read more.