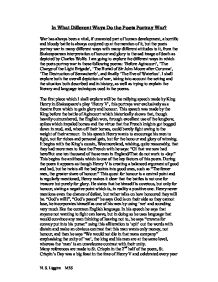 In What Different Ways Do the Poets Portray War?Before Agincourt', 'The Charge of the Light Brigade', 'The Burial of Sir John Moore after Corunna', 'The Destruction of Sennacherib', and finally 'The Eve of Waterloo'.

In What Different Ways Do the Poets Portray War? War has always been a vital, if unwanted part of human development, a horrific and bloody battle is always conjured up at the mention of it, but the poets portray war in many different ways with many different attitudes to it, from the Shakespearean interpretation of honour and glory to the sad image of death as depicted by Charles Wolfe. I am going to explore the different ways in which the poets portray war in these following poems: 'Before Agincourt', 'The Charge of the Light Brigade', 'The Burial of Sir John Moore after Corunna', 'The Destruction of Sennacherib', and finally 'The Eve of Waterloo'. I shall explore both the overall depiction of war, taking into account the setting and the situation both described and in history, as well as trying to explain the literary and language techniques used in the poems. The first piece which I shall explore will be the rallying speech made by King Henry in Shakespeare's play 'Henry V', this portrays war exclusively as a theatre from which to gain glory and honour. This speech was made by the King before the battle of Agincourt which historically shows that, though heavily outnumbered, the English won, through excellent use of the longbow, spikes which impaled horses and the virtue that the French knights got bogged down in mud, and, when off their horses, could barely fight owing to the weight of their armour. In his speech Henry wants to encourage his men to fight, not for riches and personal gain, but for the honour and glory of winning. It begins with the King's cousin, Westmoreland, wishing, quite reasonably, that they had more men to face the French with he says: "O! that we now had here/But one ten thousand of those men in England/That do not work to-day." This begins the antithesis which is one of the key factors of this poem. ...read more.

The poem depicts how the 9th Foot buried him after the battle on the city ramparts. The poem portrays a sad look at the very simple burial of a great man. The light imagery of the poem is interesting as it is only mentioned twice depicting first the "struggling moonbeam's misty light," and "the lantern dimly burning" this is interesting because the light, the hope, was fading after the death of their great leader. The first verse uses a lot of negative language "funeral", "farewell" and "grave" this gives a resounding impression of the sadness of the poem and begins the poem's morbid portrayal of war. The funeral is shown to be rushed and makeshift, it is implied that war heros should have a large funeral to honour them, but this is small and secret. No coffin is truly good enough for him yet he can have no coffin, yet he still looks impressive and worthy of being a 'hero', and yet is treated as an ordinary soldier, but does not in actual fact require the fancy trappings of other heroes, and lies quite restfully; these contrasting images that are shown in the poem really emphasise the greatness of the man and the incredibly loss of losing him. The funeral is very humble, "gazed" shows that they were thinking, allowing their minds to ponder their hero. The "prayers we said" shows they were trying to make it as much of a true funeral as possible. The rhymes are weak and fading to represent death. When the soldiers "bitterly thought of the morrow" they are considering the futility of them fighting, and the fact that if such a great hero and leader may be slain in battle then it could be them with ease. "We hollowed his narrow bed,/And smoothed down his lonely pillow" is depicting his grave as a bed. "hollowed" is a negative and morose word, which was chosen in place of 'dug'; a much more general term. ...read more.

the troops want to fight and so is unlikely to say that war is bad and they are all going to die in the mud. Lord Tennyson's 'The Charge of the Light Brigade' however, whilst appearing to be similar to Shakespeare's advocating honour and remembrance as a positive to war, there is a distinct tang of irony underlying the piece as well as the poem's strong positive/negative contrasting language. The most downbeat and gloomy outlooks on war were seen in Charles Wolfe's 'The Burial of Sir John Moore after Corunna', the whole piece appears lethargic and portrays war as gloom and despair, its weak half rhymes contributing to this overall effect, it is focussing on one death in a battle giving it's audience a better sense of the sadness and grief of death, rather than just illustrating horrific destruction on a large scale, it does have one small positive with "glory" as the final word it gives a sense of hope for the future. Lord Byron's first piece; 'The Destruction of Sennacherib' does not portray war a such, but rather a terrible destruction, it talks of the grief for the dead but it indicates that humans are nothing in comparison the God and can never hope to overpower one another if God were to intervene. Lord Byrons second piece, however 'The Eve of Waterloo' seeks to demonstrate the sadness of war, the needless destruction and seeks to contrast it with the initial ball, he further generalises the horror and destruction by not including who won, leaving the reader with a sense that war is pointless and a feeling of incompleteness. There are, obviously many different ways way can be portrayed, most we have seen in some form here, however I believe the overriding, general portrayal within these poems is that while there may be glory and honour in war, there is much more death and unnecessary destruction; in a war is not where you would really want to be . N. S. Liggins M5S ...read more.