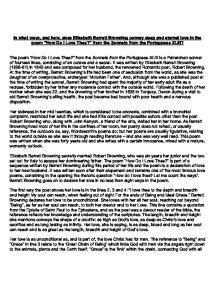 In what ways, and how, does Elizabeth Barrett Browning convey deep and eternal love in the poem How Do I Love Thee? from the Sonnets from the Portuguese XLIII?

In what ways, and how, does Elizabeth Barrett Browning convey deep and eternal love in the poem "How Do I Love Thee?" from the Sonnets from the Portuguese XLIII? The poem "How Do I Love Thee?" from the Sonnets from the Portuguese XLIII is a Petrarchan sonnet of fourteen lines, consisting of an octave and a sestet. It was written by Elizabeth Barrett Browning (1806-61) in 1845 and was composed for her husband, the renowned Romantic poet, Robert Browning. At the time of writing, Barrett Browning's life had been one of seclusion from the world, as she was the daughter of an overprotective, archetypal 'Victorian Father'. And, although she was a published poet at the time of writing the sonnet, Barrett Browning had spent the majority of her early adult life as a recluse, forbidden by her father any moderate contact with the outside world. Following the death of her mother when she was 22, and the drowning of her brother in 1838 in Torquay, Devon during a visit to aid Barrett Browning's ailing health, the poet became bed bound with poor health and a nervous disposition. Her sickness in her mid twenties, which is considered to be anorexia, combined with a bronchial complaint, restricted her adult life and she had little contact with possible suitors other than the poet Robert Browning who, along with John Kenyon, a friend of the arts, visited her in her home. As Barrett Browning lived most of her life in the confines of her room, her poetry does not reflect, or usually reference, the outdoors as, say, Wordsworth's poems do; but her poems are usually figurative, relating to the world outside as she saw it through reading literature - and she was very well read. ...read more.

Her "old griefs" may well reflect the loss of her mother and the death of her brothers, which affected her deeply. She shows her love to have the same passion as the grief she felt at their deaths - a sorrowing passion, but one of great strength. This is the same degree of passion she feels for Robert Browning, the same depth of emotion and feeling. She is aware of mortality and still feels the loss of her "old griefs" and she may fear the loss of her new love with Robert Browning, being conscious of the inevitability of death, so gives of herself completely to him. As in the previous lines, in lines 11 and 12, Barrett Browning shows her love to be as strong as the love she felt for her "lost saints"- for her mother and brothers. Lines 11 and 12 are an extension of the thought she expresses in lines 9 and 10, but she expresses her loss as a child as being one of innocence, the childhood belief that she lost all with the death of her mother and siblings. With the words "I love thee with a love I seemed to lose With my lost saints" she is expressing that she had "seemed to lose", but has now found love again with her love for her husband to be. What is more, she may have lost a part of herself, and certainly that innocent love that was marred by the death of her family members, but which she has re-found again. ...read more.

The last line "I shall but love thee better after death" refers to her love enduring after death, into her own future and beyond. With there not being a gap between the octave and sestet, and the poem reading as a whole of fourteen lines, the poet is conveying her love to be entire, complete, and unbreakable and given wholly. The poem is rich with alliteration and imagery and conveys her love to be both deep and eternal. The poem is a declaration of her love for Robert Browning, and with various religious connotations, likens her love to that of her love for God, God's love for man and her love for Robert Browning as being one of the same. The poem can be read as a vow to Browning, made before God, showing her everlasting and enduring love for him; and the promise found within the poem is encircled by the love of God. Barrett Browning conveys deep and eternal love through her choice of diction by declaring her love in eight ways; by her reference to her present, past and future and showing her love to be constant throughout her life; her use of alliteration, representing "love", and assonance, representing "I" and "thee"; her emphasis of meaning through her use of parallelism and the sense of enduring, timeless love through her use of enjambment and her soft, quiet use of the tone and sound of the poem. The reader is left with a lasting impression of the deep and enduring love Barrett Browning conveys in the poem, and the poem remains on of the most famous love poems in literature. Word count: 2687 Tony Goring 12th January 2008 ...read more.