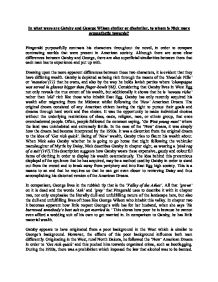 In what ways are Gatsby and George Wilson similar or dissimilar, to whom is Nick more sympathetic towards?

In what ways are Gatsby and George Wilson similar or dissimilar, to whom is Nick more sympathetic towards? Fitzgerald purposefully contrasts his characters throughout the novel, in order to compare contrasting worlds that were present in American society. Although there are some clear differences between Gatsby and George, there are also superficial similarities between them that each man has to experience and put up with. Drawing upon the more apparent differences between these two characters, it is evident that they have differing wealth. Gatsby is depicted as being rich through the means of the 'Hotel de Ville' or 'mansion'(11) that he owns, and also by the way he holds lavish parties where 'champagne was served in glasses bigger than finger-bowls'(48). Considering that Gatsby lives in West Egg not only reveals the true extent of his wealth, but additionally it shows that he is 'noveau riche' rather than 'old' rich like those who inhabit East Egg. Gatsby has only recently acquired his wealth after migrating from the Midwest whilst following the 'New' American Dream. The original dream consisted of any American citizen having the right to pursue their goals and dreams through hard work and free choice. It was the opportunity to make individual choices without the underlying restrictions of class, caste, religion, race, or ethnic group, that once overshadowed people. Often, people followed the common saying, 'Go West young man!' where the land was uninhabited and extremely fertile. In the case of the 'New' dream, it was simply how the dream had become interpreted by the 1920s. It was a distortion from the original dream to the idea of 'Get rich quick'. Being of 'New' wealth, Gatsby tries to flaunt his wealth about. When Nick asks Gatsby whether he is going to go home that night following the vehicular manslaughter of Myrtle by Daisy, Nick describes Gatsby in chapter eight, as wearing a 'pink rag of a suit'(147).This description suggests how Gatsby wears these expensive, gaudy and colourful items of clothing in order to display his wealth ostentatiously. ...read more.

The way in which Gatsby was driven by his undying love for a woman is a reflection of Fitzgerald's own life and dreams too. He too joined the army (1917) and eventually fell in love with a seventeen year old girl called 'Zelda Sayre'. Zelda finally agreed to marry him, but her overpowering desire for wealth, fun, and leisure led her to delay their wedding until he could prove a success. Their relationship appears to be like Gatsby and Daisy's. The following quote reveals the point in the novel at which all of Daisy's charm and beauty is stripped away, leaving nothing but money to be admired underneath: 'That was it. I'd never understood before. It was full of money- that was the inexhaustible charm that rose and fell in it, the jingle of it, the cymbals' song of it.' (Chapter seven) Gatsby realizes late into the novel, how his dream has been ripped apart into dollar bills as he discovers that for years he has been in pursuit of not love, but cold, harsh money which is hidden behind the disguise of a human face. Following the death of Gatsby and the suicide of George, it becomes apparent that Fitzgerald is using the deaths of a rich man and a poor man who both set out to achieve their unattainable goals, to symbolise the death of the original dream on which America was founded. With consideration given to George, he too shares the American Dream with Gatsby; however he seems to be pursuing the 'old' American Dream and not the 'New' one like Gatsby. George reveals his dream in chapter seven, where he says: I've been here too long. I want to get away. My wife and I want to go West. She's been talking about it for ten years.' Clearly his dream is the opposite of Gatsby's. He wants to migrate West like the original settlers and wants to follow the idea to 'Go West young man!' ...read more.

Nick as narrator, appears to be far more lenient towards Gatsby. Following the deaths of both men, Nick only makes it his duty to sort out Gatsby's funeral and does not think of George's. In addition, when Tom wants Nick to meet his mistress in chapter two, Nick says how he had 'no desire to meet her.' This statement suggests how Nick feels he is being disloyal to Daisy. He does not think to consider how George would feel knowing about the affair his wife is having with one of his own acquaintances (Tom). Additionally, Nick seems to overlook Gatsby's criminal behaviours even though he has been given enough evidence to suggest that Gatsby is a gangster. Fitzgerald's portrayal of both men differs greatly, so much so that they appear to be direct opposites of one another. Gatsby is rich and has a more fulfilling life than George, who suffers the dullness of living in a dump (Valley of Ashes) and the lack of respect from his wife. The relationship between George and his wife is peculiar and goes against the historical view of a married couple. In the Victorian era, women would have had to stay at home in order to attend to maternal duties, whilst the husband would have had to provide the income. Usually the man had the authority over the woman, and in the case of the Wilson's, there has been a role reversal. However, these two men are linked superficially by their failure to achieve their unattainable dreams which they had been pursuing throughout life. Considering that Gatsby was originally a working class poor man in previous years, and that he and George both die in honour of their failed dreams, suggests that when a poor man tries to enter into a higher social status like Gatsby, their efforts are rendered useless. Not only does this circumstance reveal the divide in society but additionally it emphasises the moral decay of American society amidst the superficial impressiveness of upper-class profligacy. WORDS: 3,033 ...read more.