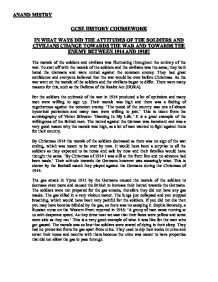 In what ways did the attitudes of the soldiers and civilians change towards the war and towards the enemy between 1914 and 1918?

GCSE HISTORY COURSEWORK IN WHAT WAYS DID THE ATTITUDES OF THE SOLDIERS AND CIVILIANS CHANGE TOWARDS THE WAR AND TOWARDS THE ENEMY BETWEEN 1914 AND 1918? The morale of the soldiers and civilians was fluctuating throughout the entirety of the war. To start off with the morale of the soldiers and the civilians was the same; they both hated the Germans and were united against the common enemy. They had great confidence and everyone believed that the war would be over before Christmas. As the war went on the morale of the soldiers and the civilians began to differ. There were many reasons for this, such as the Defense of the Realm Act (DORA). For the soldiers the outbreak of the war in 1914 produced a lot of optimism and many men were willing to sign up. Their morale was high and there was a feeling of togetherness against the common enemy. 'The mood of the country was one of almost hysterical patriotism and many men were willing to join.' This is taken from the autobiography of Victor Silvester 'Dancing Is My Life.' It is a great example of the willingness of the British men. The hatred against the German was imminent and was a very good reason why the morale was high, as a lot of men wanted to fight against them for their country. By Christmas 1914 the morale of the soldiers decreased as there was no sign of the war ending, which was meant to be over by now. It would have been a surprise to all the soldiers as they expected to be home and safe by now and their families would have thought the same. ...read more.

He wrote many poems including 'Suicide in the trenches (1917).' He actually partitioned the government to end the war when he was sent home from the front line with an injury. By 1917 the Battle of Somme was still being fought and the soldiers morale was not getting any better. The soldiers were beginning to become increasingly depressed by the very small amounts of land that was actually being won and their anger had turned to their officers, which was away for the Germans. This is shown by their drop in enthusiasm and their willingness to fight for their country, which is shown in their pour performances in the battles. In December 1917 Russia withdrew from the war leaving Britain in an even worse position than they were at. This again decreased their morale because the soldiers had lost an ally and all the German soldiers left to fight on the West Front. This also caused a surge of hatred towards the Germans. However although Russia pulled out, immediately after that in 1917 the Americans announced that they were going to join. This increased the morale of the soldiers dramatically, as they now had fresh troops. However they had to wait a little while, as they did not arrive until 1918. When the American troops did arrive the morale definitely increased. This is inevitable as America were one of the strongest nations during World War 1. In 1918 the Spring Offensive took place. Yet again the soldiers morale increased as they are told that it will be the last battle. They had fresh supplies and fresh troops so this time the last push might have actually been the last push. ...read more.

My family lived on bones from the butcher made into soups. And black bread. And when some food did get delivered to the shops everyone for miles around besieged the place.' At the beginning of 1918 the Germans blockaded shipping and therefore rationing was introduced and, as a result of this the British civilians blamed the Germans and as a result of there was a surge of hatred towards the Germans. Food such as flour, sugar, tabacco and butter were all rationed. Finally in 1918 the morale goes up and stays up, because the spring offensives were successful. The Armistice was then announced on the 11th of November 1918 and the war had finally ended. Charles Montague, letter to Francis Dodd (18th November, 1918) 'It has been a wonderful progress eastwards, always coming into new towns and villages where the people rushed out, and shook hands and kissed us and sometimes offered us pieces of bread, thinking we must be half-starved like themselves and the German troops.' This is a good example of how the civilians felt when the British men returned home. They were very excited and grateful to see their loved ones. Overall the attitude of the soldiers and the civilians changed towards the war and towards their enemy throughout 1914-18. At the start of the war the feeling was the same for the soldiers and the civilians. However during the war many factors affected the difference in morale of the soldiers and the civilians. The use of D.O.R.A and W.P.B by the government allowed them to hide the truth from the civilians, while the soldiers were fighting in the war and saw the reality of it firsthand. ...read more.