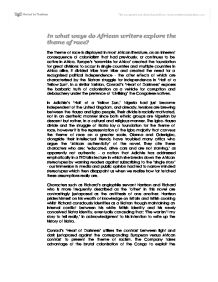 In what ways do African writers explore the theme of race?

In what ways do African writers explore the theme of race? The theme of race is displayed in most African literature, as an inherent consequence of colonialism that had previously, or continues to be active in Africa. Europe's 'scramble for Africa' created the foundation for great divisions to occur in single countries and multiple countries in Africa alike, it divided tribe from tribe and created the need for a recognised political independence - the after effects of which are characterised by the Biafran struggle for independence in 'Half of a Yellow Sun'. In a similar fashion, Conrad's 'Heart of Darkness' exposes the barbaric truth of colonisation as a vehicle for corruption and debauchery under the pretence of 'civilising' the Congolese natives. In Adichie's 'Half of a Yellow Sun,' Nigeria had just become independent of the United Kingdom, and already, tensions are brewing between the Hausa and Igbo people. Their divide is racially motivated, not in an aesthetic manner since both ethnic groups are Nigerian by descent but rather, in a cultural and religious manner. ...read more.

internal conflict between his white British identity and his newly conceived Biafra identity, eventually conceding that: 'The war isn't my story to tell really,' in acknowledgment to his intention to write up the history of Biafra. Conrad's 'Heart of Darkness' utilises the contrast between light and dark juxtaposed against the corresponding European versus African contrast to present the theme of r****m. The Company takes advantage of the brutal colonisation of the Congo to exploit the cheap labour in the form of 'uncivilised' Congolese natives - of whom they intend to civilise in a 'humane' way. The notion of which is implicitly mocked by Conrad: '[...] after all, I was a part of the great cause of these high and just proceedings,' a reflection of the barbaric handling of native slaves. Despite the fact that 'Heart of Darkness' is set in the Congo this does not detract from the 'otherness' felt by the reader towards the natives - a theory backed by Guyanese novelist Wilson Harris. ...read more.

Africa as metaphysical battlefield devoid of all recognisable humanity, into which the wandering European enters at his peril [...] reducing Africa to the role of props for the break-up of one petty European mind.' Whilst there is some truth in this, critics on the other side of the debate would respond by saying that Achebe is judging Conrad's supposed r****m on a modern day scale rather than in a nineteenth-century context. In conclusion, r****m as a theme in explored by the writers in a range of other themes but most predominantly the theme of colonialism - a context which not only forms the setting - in the case of 'Heart of Darkness' - or even the foundation for independence - in the case of 'Half of a Yellow Sun,' but also the mood and tone of the novels. Colonialism left Nigeria in a political disarray and catalysed the inevitable rift between the Hausa and Igbo ethnic groups in 'Half of a Yellow Sun,' whilst also forming the perfect cover up for corrupt European traders such as The Company to conduct their exploitative treatment of cheap African Labour. ?? ?? ?? ?? ...read more.