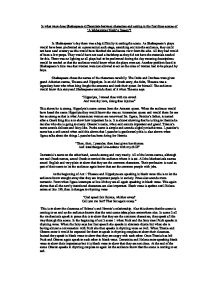 In what ways does Shakespeare differentiate between characters and setting in the first three scenes of 'A Midsummer Night's Dream'?

In what ways does Shakespeare differentiate between characters and setting in the first three scenes of 'A Midsummer Night's Dream'? In Shakespeare's day there was a big difficulty in setting the scene. As Shakespeare's plays would have been preformed on a proscenium arch stage, stretching out into the audience, they could not have used scenery as this would have blocked the audiences view from the side. All they had would of been a few props. They would have not used a backdrop as they did not have the materials needed for this. There was no lighting so all plays had to be preformed during the day meaning descriptions would be needed so that the audience would know when the plays were set. Another problem faced in Shakespeare's time was that women were not allowed to act so the roles of women had to be played by boys. Shakespeare chose the names of his characters carefully. The Duke and Duchess were given grand Athenian names, Theseus and Hippolyta. In an old Greek story, the duke, Theseus was a legendary hero who when king fought the amazons and took their queen for himself. ...read more.

Instead they speak in blank verse to show that they are angry with each other. Once Titania has left Puck and Oberon again speak to each other in blank verse. Demetrius and Helena enter speaking blank verse to show their importance but it is blank verse to show that they are not close. At the end of the scene Oberon speaks in rhyming couplets to again let the audience know that the scene is coming to an end. The beginning of scene 1 is about Theseus and Hippolyta discussing their upcoming wedding. Theseus wants the day to come quicker "Another moon. But, o, methinks how slow This old moon wanes, she lingers my desires," The main part of act 1 is about the Hermia, Lysander and Demetrius love triangle. Egeus wants Hermia to marry Demetrius but Hermia wants to marry Lysander. Egeus is prepared to have his daughter killed if she does not do what he wants. Near the end of the scene you hear Lysander and Hermia talking and realise that they really love each other, you then hear how they plan to run away. ...read more.

This is funny because a lion only roars and does not speak. The mechanicals also use vulgar prose this would appeal to the less educated people at the front. Act 2 scene 1 is comical when Puck is explaining all the tricks he has played on the village people, but the scene soon turns tragic when Oberon and Titania discuss all the discord they have caused in the world. Ironic comedy is set up at the end of this scene. The audience know that there are two men in Athenian garments in the wood that night with a women but Puck does not. As there was a major lack of scenery in Shakespeare time he had to let the audience know the setting by using imagery. Theseus and Hippolyta let the audience know it is night time at the very beginning of the play. They regularly refer to the moon "And then the moon, like to a silver bow" At the beginning of act 2 a whole speech by the fairy is dedicated to imagery "Over hill, over dale Thorough bush, thorough brier Over park, over pale Thorough flood, thorough fire;" This is to describe to the audience the woodland. ...read more.