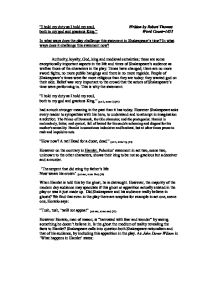 "I hold my duty as I hold my soul, Written by Robert Thomas both to my god and gracious King." Word Count=1453 In what ways does the play challenge this statement in Shakespeare's time? In what ways does it challenge this statement now? Authority, loyalty, God, king and medieval certainties; these are some exceptionally important aspects in the life and times of Shakespeare's audience as well as those of the characters in the play. Times have changed; there are no more sword fights, no more public hangings and there is no more regicide. People of Shakespeare's times were far more religious than they are today: they wanted god on their side. Belief was very important to the crowd that the actors of Shakespeare's time were performing to. This is why the statement: "I hold my duty as I hold my soul, both to my god and gracious King." (act 2, scene 2) (44) had a much stronger meaning in the past than it has today. However Shakespeare asks every reader to sympathise with his hero, to understand and to attempt in imagination a solution. The Prince of Denmark, the title character, and the protagonist. Hamlet is melancholy, bitter, and cynical, full of hatred for his uncle's scheming and disgust for his mother's sexuality. Hamlet is sometimes indecisive and hesitant, but at other times prone to rash and impulsive acts. ...read more.

within a month." However, Hamlet does not have total belief in his father's ghost, as we hear his inside thoughts during his long and motivating soliloquies. There are several times Hamlet has the opportunity to kill King Claudius but is reluctant to do so, except from when he kills Polonius, who hopes is the king. He commits this murder, as he wants the decision taken out of his hands. This is why he gets so emotional when he sees his actor crying over something that isn't even real. "O what a rogue and peasant slave am I!" "....... Had he the motive and the cue for passion That I have? He would drown the stage with tears." (act 2, scene 2) (544) His emotions build up, as he cannot even bring himself to kill his father's murderer. The first time we see Hamlet, the stage directions portray him to be dressed in black, which shows his melancholy and that within he feels his father's death and his mother's hasty marriage. This is the first time the audience see Hamlet challenging the beliefs of his mother and fellow countrymen. Hamlet shows the audience how Hamlet feels and his rebellion towards the inconvenience of his mother and the king's marriage. 'Life must go on' The character of Hamlet has fascinated audiences and readers for centuries, and the first thing to point out about him is that he is mysterious individual. ...read more.

This shows that both the Jacobean society and the 21st century society have no difference in a man who holds his duty to his God and King. Shakespeare has developed a character that can perform in any society. In the play trickery among actors was routine if their actions were to help the king. Even some of Hamlet's closest friends, Rosencrantz and Guildenstern, betray him and deceive him merely because they are loyal and patriotic to the King. This shows that in Shakespeare's culture betrayal would occur among communities just to show loyalty. "But we both obey, And here give up ourselves in the full bent To lay our service freely at your feet To be commanded." Act 2, scene 2) (29) Kenneth Branagh's film of Hamlet invites the viewer to question such friendship and morals of characters such as Rosencrantz and Guildenstern, against that of loyalty to the King as if you break these principles then, inevitably, you have been undutiful to God as in the 'Holy Bible' it clearly states in the Ten Commandments: "You shall have no other gods besides Me." "You shall not bear false witness against your neighbour." (The Ten Commandments - Exodus 20:1-17) These commandments were written in times long ago and opinions have changed over time. Through the different characters in Hamlet Shakespeare challenges Polonius' statement in ways which make the audience think, no matter what period they are living in. ...read more.