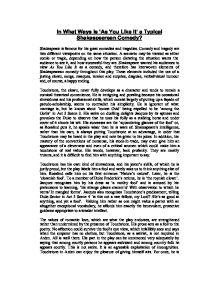 In What Ways is 'As You Like It' a Typical Shakespearean Comedy?

In What Ways is 'As You Like It' a Typical Shakespearean Comedy? Shakespeare is famous for his great comedies and tragedies. Comedy and tragedy are two different viewpoints on the same situation. A scenario may be viewed as either comic or tragic, depending on how the person dictating the situation wants the audience to see it, and how successful they are. Shakespeare wanted his audiences to view As You Like It as a comedy, and therefore has interwoven elements of Shakespearean comedy throughout this play. These elements included the use of a jesting clown, songs, masques, tension and surprise, disguise, verbal/visual humour and, of course, a happy ending. Touchstone, the clown, never fully develops as a character and tends to remain a comical theatrical convenience. He is intriguing and puzzling because his occasional shrewdness and his professional skills, which consist largely of putting up a fa�ade of pseudo-scholarship, seems to contradict his simplicity. He is ignorant of what marriage is, but he knows about 'honest Ovid' being expelled to be 'among the Goths' in Act 3 Scene 3. His satire on duelling delights Jacques by its aptness and provokes the Duke to observe that he uses his folly as a stalking horse and under cover of it shoots his wit. His successes are the 'squandering glances of the fool' or, as Rosalind puts it, he speaks wiser than he is ware of. ...read more.

Many of them are provided my Amiens, who is a person in the play and not an anonymous singing-boy brought in for a special occasion. 'Blow, blow, thou winter wind' and Hymen's choral song are used to fill the time while characters on the stage recount adventures already known to the audience. 'What shall he have that killed the deer?' passes the time between Orlando's promise to return to Rosalind 'at two o'clock' and his failure to keep that promise. 'Under the greenwood tree' gives Jaques a chance to display himself in person, after the long account of him at second hand. 'It was a lover and his lass' suggests a time lapse before Rosalind's revelations, promised for 'to-morrow'. This is a play to which it was particularly important to impart a feeling of time passing and life going on, of the world wagging, rather than of violent happenings. The songs evoke a carefree, merry mood and conjure up woodland on a bare stage. They are used in some instances to hint at evils and problems. Even 'It was a lover and his lass' has a hint of sadness in it, 'how that life was but a flower'. Shakespeare used songs to a greater degree, however, to make any situation a slightly more comical one; to imply a lighter mood. The song, 'What shall he have that killed the deer?' in Act 4 Scene 2 mostly provides a cheerful choral interlude, with a broad joke at the expense of a cuckold's horns. ...read more.

Another is that the characters, through Shakespeare and through the element of disguise, may mirror situations in real life where we find ourselves in a similar scenario of mistaken identity, along with all the confusion and commotion this brings. The theme of a happy ending is fundamental for a romantic comedy, and it primarily involves mass marriages and plenty of song and merrymaking. A happy ending reassures the audience that 'all's well that end's well', and for a moment the audience is fully engrossed in the gaiety of the situation and forgets all the worries, dark points and serious elements of the play. It does not necessarily need to unravel all the mysteries, reveal all the secrets and solve all the problems, but the audience merely has to feel like it does through the festivities on the stage. It must leave no immediate situations for the audience to worry about or consider, and must instead be purely and completely devoted to the intense joy the masque has brought about. Using a combination of comical elements (a jesting clown, songs, masques, tension, surprise, disguise, verbal/visual humour, and a happy ending), much like a cook uses a variety of ingredients and spices to flavour a good meal, Shakespeare has succeeded in making As You Like It a typical Shakespearean comedy. Sources: R. Noble, Shakespeare's Use of Song, B.G. Lyons, Voices of Melancholy, 'As You Like It' Scrutiny IX, L. Hotson, Shakespeare's Motley, J. Palmer, Comical Characters of Shakespeare, J.D. Wilson, Shakespeare's Happy Comedies. ...read more.