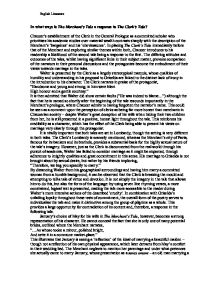 In what ways is The Merchant's Tale a response to The Clerk's Tale?

In what ways is The Merchant's Tale a response to The Clerk's Tale? Chaucer's establishment of the Clerk in the General Prologue as a committed scholar who prioritises his academic studies over material wealth contrasts sharply with the description of the Merchant's 'bargaines' and his 'chevissaunce'. In placing The Clerk's Tale immediately before that of the Merchant and exploring similar themes within both, Chaucer introduces to his readership a likelihood of the second tale being a response to the first. The differing attitudes and outcomes of the tales, whilst having significant links in their subject matter, provoke comparison of the narrators in their personal discussions and the protagonists become the embodiment of their views towards marriage in the tales. Walter is presented by the Clerk as a largely stereotypical marquis, whose qualities of humility and understanding in his proposal to Griselda are linked to the distinct lack of irony in the introduction to his character. The Clerk narrates in praise of the protagonist, "Handsome and young and strong; in him were blent High honour and a gentle courtesy." It is then admitted that Walter did show certain faults ("He was indeed to blame...") although the fact that he is named so shortly after the beginning of the tale resounds importantly in the Merchant's prologue, where Chaucer admits to having forgotten the narrator's name. ...read more.

He cannot conceal the fact that she is only one of many potential brides, outlined where the Merchant narrates, "...As whoso tooke a mirour, polished bright, And sette it in a commune market-place." This illustrates that January is seeing a 'reflection' of the ideal of marrying a beautiful maiden - though not a reflection of his own physical appearance, which later detracts from May's comfort in their wedding bed. The Merchant neglects to mention her parentage and under what pretences she actually came to marry January, whose presentation as a senex amans - an old man marrying a young girl - carries a significant potential for mockery. The various references to May's 'tendre flesshe' serve as a reminder that the relationship on the knight's part is driven by s****l desire and obsession and there is a great distinction between the humorous presentation of January's appearance and the grotesqueness that is his later refusal to release her hand. A possible interpretation of the tale is that Chaucer intended it to be humorous to appeal to the reader after the more solemn words of the Clerk; on the part of the Merchant, January's character may be under ridicule in order that the same view may be brought about regarding marriage. These important contradictions of the previous tale, both in content and in attitudes, give the impression of the Merchant's words most certainly being a response to the Clerk. ...read more.

Despite the implications of being under constant surveillance by her husband, May eventually manipulates him in order to gain access to Damyan, which provokes the final comments from the Merchant in his conclusion that all women are deceptive. Conversely, Griselda has a great deal of speaking parts in The Clerk's Tale and formally promises her obedience to Walter in the lines, "...And here I promise never willingly To disobey in deed or thought or breath..." In this way, both tales are made distinctive through the exploration of a controversial subject of the time, namely the status of women, and the conclusions of the tales differ dramatically. Chaucer uses May and Griselda to reflect the personalities of their husbands, which has the effect of encouraging the reader to acknowledge flaws - especially the certain depravity of January's intentions and the Walter's preoccupation with testing the faithfulness of his wife. The narrative and events of The Merchant's Tale must certainly be considered a response to The Clerk's Tale simply for their proximity to one another in The Canterbury Tales and their highly similar, yet interpretable themes. It seems natural for the pilgrims to compete with each other in the telling of their tales for a desire to be the most entertaining, and the two tales become the two sides of a debate regarding marriage. It is in this context that the words of the Merchant become a finely timed and thorough response to the preceding words of the Clerk. English Literature ...read more.