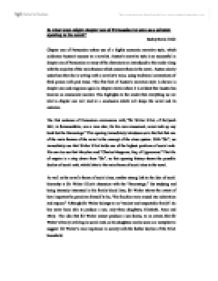 In what ways might chapter one of Persuasion be seen as a suitable opening to the novel?

In what ways might chapter one of Persuasion be seen as a suitable opening to the novel? Becky Harris 12G2 Chapter one of Persuasion makes use of a highly economic narrative style, which celebrates Austen's success as a novelist. Austen's narrative style is so successful in chapter one of Persuasion as many of the characters are introduced to the reader along with the majority of the main themes which concern them in the novel. Austen clearly underlines that she is writing with a novelist's voice, using traditional conventions of third person with past tense. This first hint of Austen's narration style is shown in chapter one and reappears again in chapter eleven where it is evident that Austen has become an omniscient narrator. This highlights to the reader that everything we are told in chapter one will lead to a conclusion which will shape the novel and its outcome. The first sentence of Persuasion commences with; "Sir Walter Elliot, of Kellynch Hall, in Somersetshire, was a man who, for his own amusement, never took up any book but the Baronetage." ...read more.

It also goes to show Sir Walter's carelessness of major affairs, as the only script he cares to read is his own "Baronetage". When describing Walter Elliot, Austen uses flattering language, such as "fine", "beauty" and "good looks". There is a tone of acute amusement and gentle contempt in Austen's writing with "Sir Walter Elliot, who united these gifts, was the constant object of his warmest respect and devotion". This tone almost suggests to us that Austen does not perceive beauty to be of the utmost importance in life. By saying of Sir Walter that "he could read his own history with an interest which never failed" demonstrates to us that Sir Walter lifts himself above others in society and above money. By doing this it leads us to question whether Sir Walter Elliot is as wealthy as he would first appear to be. The description of appearance in a woman is presented to us by Austen when describing Anne Elliot; "Anne Elliot had been a pretty girl, but her bloom had vanished early." ...read more.

In the opening sequence of the novel, we are presented with the theory of the 'fin de siecle', where those who are born into wealth can no longer perpetuate it, which signifies the demise of the aristocratic order. It would appear that Austen almost seems to degrade the families born into money in Persuasion and begins to celebrate the importance of the common man. In conclusion, the opening chapter of Persuasion is a suitable opening to the novel as it introduces the majority of the central characters together with a little of their history. The chapter also hints at many of the major themes in the novel; social class, blood lines and marriage. The most interesting theme to be introduced in the opening chapter however, is that of appearance and vanity. The introduction of this theme not only provides the reader with an informed view of Sir Walter's perception of vanity, but we are able to detect senses of Austen's opinions concerning appearance. With this input to the novel we can recognise aspects of Austen's character reflected in Anne Elliot. This is particularly insightful as Austen learnt of her impending death whilst penning the novel which could have had an impact on certain character's views of issues in Persuasion. 1,158 ...read more.