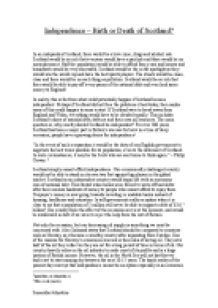 Independence Birth or Death of Scotland?

﻿Independence ? Birth or Death of Scotland? In an independent Scotland, there would be a low crime, drugs and alcohol rate. Scotland would be so rich that everyone would have a paid job and there would be no unemployment. Half the population would be able to afford fancy cars and houses and businesses would be very successful. Scotland would be the in the spotlight as they would win the world cup and have the best sports players. The streets would be clean, clear and there would be no such thing as pollution. Scotland would be so rich that they would be able to pay off every penny of the national debt and even lend some money to England! In reality, this is far from what could potentially happen if Scotland became independent. Perhaps if Scotland did not face the problems it had today, then maybe some of this could happen to some extent. If Scotland were to break away from England and Wales, everything would have to be divided equally. ...read more.

Our country feels the effect of the recession as it is at the moment, and would be swallowed in debt if we were to reject the help from the rest of Britain. Not only the recession, but our decreasing oil supply is something we must be concerned with. Alex Salmond states that Scotland should be compared to countries such as Norway, as it became a wealthy country after separating from Sweden. One of the reasons for Norway?s economical success is their idea of saving oil. They save half of the oil they collect so they are set for a long period of time in terms of oil. Our country heavily relies on the oil industry to make most of its profits and is a large portion of British income. However, the oil in the North Sea will not last forever and is set to start running dry between the next 10-15 years. The harsh reality of the present day conveys that independence cannot be an option especially in an economic position like ours. ...read more.

The idea of piling on pressure for Scotland to try and cope with dealing with reserved matters is unnecessary and unjustified. We have Scottish MP?s sitting in Westminster having a say on English issues but there are no English MP?s sitting in Holyrood! The Scottish parliament has only Scottish MP?s but in Westminster English parliament they have Scottish, Welsh and Northern Irish deciding on theirs! The English if anyone should be the ones complaining! It is clear that Scotland is in such a strong position as we only make up a tenth of the population yet holds such a high degree of power. Why destroy that by becoming independent? In an independent Scotland, there would be an increase on crime, drugs and alcohol rate due to the high degree of unemployment. The national debt would still remain unpaid which means a decrease in the quality of health and education. Any intelligent being would see that there are far too many obstacles in the way of Scotland being a successful independent nation. In a time when our economy is unstable, Scottish independence is a waste of money, time and energy. ...read more.