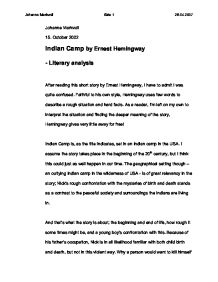 Johanne Markvoll 15. October 2002 Indian Camp by Ernest Hemingway - Literary analysis After reading this short story by Ernest Hemingway, I have to admit I was quite confused. Faithful to his own style, Hemingway uses few words to describe a rough situation and hard facts. As a reader, I'm left on my own to interpret the situation and finding the deeper meaning of the story, Hemingway gives very little away for free! Indian Camp is, as the title indicates, set in an Indian camp in the USA. I assume the story takes place in the beginning of the 20th century, but I think this could just as well happen in our time. ...read more.

Why a person would want to kill himself isn't easy to understand for a young boy like Nick. Not even his father, the doctor, has a good explanation for this. To the mystery of birth, the doctor gives his son a plain and simple medical explanation of what is happening, but suicide is far from as easy to explain as what happens when a child is born. The doctor strikes me as a highly respected and likeable person. He is calm and focused during all the incidents in the shanty - exactly the kind of man you would want to help you in a situation like this. ...read more.

Hemingway's style is abrupt and leaves many questions out in the open, and I think this is part of what made me a bit frustrated reading this short story. But, after reading through it another time, it started to address me in a higher degree. These mysteries of life that Hemingway focuses on in Indian Camp are fascinating issues that have made philosophers and common people ruminate on through all times. I still can't say that I fully understand the underlying meaning of this short story, but while reading it, Indian Camp made me think and reflect, and I think Hemingway would be satisfied, just knowing his story had at least achieved this! Johanne Markvoll Side 1 28.04.2007 ...read more.